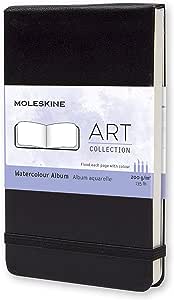 Sarah C.
3.0 颗星，最多 5 颗星 Varying paper quality or change in paper stock?
2016年5月11日 - 已在美国亚马逊上发表
已确认购买
This has always been my go-to watercolor sketchbook. I purchased this notebook in 2013 and it served me very well. A couple of weeks ago, I purchased another and the paper quality is NOT the same. See my comparison photos between the new paper and the old. The paint coverage is spotty on the newer paper and where the old paper was sturdy enough to use both sides, on the new paper, heavy watercolor shows through the reverse.

I've read elsewhere that Moleskine paper quality can vary so I probably won't give up on this notebook all together but I am disappointed the quality on this book is lacking.

K. Roy
1.0 颗星，最多 5 颗星 Absolutely frustrating to work in if you like to layer.
2018年4月24日 - 已在美国亚马逊上发表
样式: 大型已确认购买
I've been using this watercolor sketchbook now for over a year and I definitely have to say I dislike it (and "dislike" is putting it mildly.) This is obscenely expensive, as well, considering how mediocre its paper is.

If you've used professional quality watercolor paper, you'll understand more of why the Moleskine's paper is just a nightmare to work on. I also purchased this because of all the rave reviews.

To be fair, I'm guessing a lot of the people who had nice things to say about this sketchbook probably don't use it the same way I do. I'm a layerer. I like building layers to create depth. And while you hypothetically can layer in this, be prepared to put up a fight doing it (and if you've only ever layered in a Moleskine, I implore you to purchase a small block of Arches Aquarelle watercolor paper and layer on THAT and see what a massive difference there is between the two.)

As others have mentioned, the primarily-cellulose content of this paper and its strange sizing ultimately seems to prevent the pigments from your paints from soaking in. A lot of the time, they seem to just sit there at the surface, and even after thorough drying, the moment you touch a wet paintbrush to the un-absorbed pigment, it reactivates and then you have a mess on your hands.

This is like a 1-layer then done kind of paper. So yes, it's likely great for quick studies, but if you want to put something more "finished" in it, then it's going to be frustrating.

The Strathmore 400 series Watercolor Art Journal is a slight step up from the Moleskine. The paper is thicker so it doesn't buckle and warp so much. But it still absorbs paint oddly because it's 100% wood pulp paper.

I'm on the search now for a good watercolor sketchbook that uses 100% cotton artist-grade watercolor paper. I have "The Perfect Sketchbook" which was a kickstarter campaign, but they only produced limited qualities and they likely won't make them again because the ROI just wasn't there. But that sketchbook uses Fabriano Artistico watercolor paper, and it's a dream to work on if you like to layer.

I think until someone manufactures a watercolor sketchbook with the above listed requirements, I may hand-bind my own with my preferred paper.

Olechka
5.0 颗星，最多 5 颗星 This is great!
2016年3月30日 - 已在美国亚马逊上发表
样式: 大型已确认购买
Great product, perfect size for sketching on the go. I use watercolor and it takes the medium well and doesn't warp too much. Opens flat to scan artworks with ease.
阅读更多

I found the paper absorb water pretty quickly compares to other water color paper i used. So if you are doing the wet-painting method, try to apply more clear water as your first layer.
阅读更多

This is one of the BEST watercolor pads I have have ever owned. It is small, which is perfect for me to keep in my white lab coat while at work and allows me to draw and sketch on the fly. I use archival/fineliner pigment pens with watercolor pencils over it. The paper is slighlty rough and tends to wear away the nib slightly faster than regular sketch paper but the beautiful and stark contrast is worth the extra cost of buying more pens.

Disclaimer: I DID NOT receive this product at a discounted price or free in exchange for an honest review. Being someone who uses customer reviews to extensively guide my own amazon purchases, I review products honestly without being influence by discounts or price. My rating and review of this product would be what the current price listed and not at the discounted price that I was given. As a reviewer, I will happily answer any questions presented to me about this product.

If this review was helpful, please click “YES” below.
阅读更多