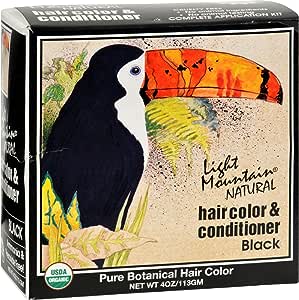 Light Mountain Natural Hair Color and ConditionerThe premier natural hair color and conditioner product line. Choose from our original line with the famous "henna animals" in 12 shades, or our unique Color the Gray line with 8 shades. We use no chemicals and no synthetic ingredients, only pure premium henna and other botanicals. We have been blending henna based natural hair colors since the early 1980's and are the leading totally natural line in the natural products industry.

*Henna is the only natural hair color with an FDA monograph for safe and effective use as a natural hair color.
*Light Mountain uses NO PPD, No Ammonia, No Peroxide, No Chemicals whatsoever.
*Each batch of our premium grade henna is tested to ensure that it has no contaminants such as heavy metals or pesticides.

Choose from our original line with the famous "henna animals" in 12 shades:

Adriana Wissmann
4.0 颗星，最多 5 颗星 Gorgeous color, fades quickly
2017年11月13日 - 已在美国亚马逊上发表
已确认购买
Interesting product. I have been using the LM red henna for several years now, and just wanted to switch up my color for fun. The dye "mud" dried out much quicker than plain red henna, and was rather crumbly, but not all too difficult to apply. I adore the color that I have achieved with this black dye, but it is definitely washing out rather quickly. It has been only a week since I dyed my hair, and already the dye has pretty much faded completely from my natural roots that had grown in since the last time I used the red henna. (A note: my natural hair is a gray ashy brown, but with the red henna my hair is a rich auburn chestnuty color: this black dye covered the two colors much differently.) As expected, the dye did cling much better to the hair that had already been covered in henna, but still, every time I shampoo my hair I wash out a bit more blue. The resulting dye job is pretty interesting: I did not achieve a true black, but rather a very dark brown. In some lights it looks darker and has a blue tint (due to the indigo), and in other lights the red from the henna really shines through and the color is like a luscious dark brown. The conditioning effect is just as good as with plain henna, and my hair looks super shiny and gorgeous! I am taking one star off only because of the short-ish lifespan of the true "black"-ness of the dye.
阅读更多
8 个人发现此评论有用

putdepuckindenet
2.0 颗星，最多 5 颗星 Wish I could praise this product, but can’t
2018年11月2日 - 已在美国亚马逊上发表
已确认购买
I’m a male Elvis tribute artist with the real sideburns, but a horseshoe pattern of hair on my head. So, I wear a hairpiece for the Elvis hair. I’ve been using Just For Men jet black for years for the sideburns which must be black, with relatively little muss and fuss. The only downside was the risk of an allergic reaction. The great part was the ability to use one package for multiple applications. But, despite being declared not allergic to JFM a couple of years ago, I have recently had an itchy rash on the right side of my neck and shoulder. I was advised to start looking at alternatives for hair coloring.

Which brings me to Light Mountain. The reviews looked good and it claims to be hypoallergenic. I knew it wouldn’t be as easy as JFM, but I ordered it anyway.

Today, I mixed the powder with the 12-16 oz. of boiling water and let it cure, per the instructions. My plan was to place it into several sealable Ziplock containers (which I did) to “save” it for multiple applications. But, the smell just about made me gag. And it totally funkified the house. And worse, once I applied it to my sideburns and head (I gave it about 40 minutes to sink in), I immediately showered it off to see the results but the awful smell remained. It is an offensive odor, IMO. What’s more, what little coloring occurred, was pretty much gone.

Now, I gave it two stars instead of one because I recognize that this product is probably meant for women rather than men with little hair. And, it’s probably not designed for sideburns, either. But, I’m sure it probably works for some, so I will not be totally harsh about it. But, I just can’t get past the smell.

For me, this product didn’t work. The search continues.

HSM
5.0 颗星，最多 5 颗星 JET. BLACK. On VIRGIN hair!!!
2020年6月2日 - 已在美国亚马逊上发表
已确认购买
Oh. My. God.
An all natural hair dye, with no ammonia, formaldehyde, or PPD, among so many other harmful ingredients. And it WORKS. No bleaching necessary! Granted, my hair was the darkest brown (almost black) before I dyed it, so I was already primed to have the best results.
Even so, wow! The pre-made ratio of indigo and henna powder is perfect! No guessing and worrying about results. The only thing I did differently was add warm (not boiling hot, please be careful) black tea, instead of just water. It worked beautifully. And it looks so natural! It even worked on my eyebrows! I'll be sticking to this brand from now on!

IM
5.0 颗星，最多 5 颗星 My favorite for more than 5 years now
2013年9月8日 - 已在美国亚马逊上发表
已确认购买
Yes, it is messy. Yes it takes a while (I try t0 keep in "on" for more than an hour, but the longer the better). However - it is natural,does not seep nasty chemicals through my skin, I love the smell (smells like wet hay which reminds me of childhood summers spent in the grandma's village)
Makes hair stronger as opposed to weaker (when using chemicals)
Makes hair shinier
Is a natural conditioner
Does not FULLY cover grays, but blends them well enough not to be very noticeable - which creates a more natural look than the obvious fake coverage
This particular product has natural ingredients ONLY, not the deceiving "mostly natural with a splash of ammonia, peroxides and p-phenylenediamine"
Since I am coloring my hair every 4 or so weeks (mine grows rather fast, some can get away with every 6 weeks. Also it washes off because it is not embedded in the hair structure)
Will keep on using!

Amazon Customer
5.0 颗星，最多 5 颗星 and I really like this one
2017年5月5日 - 已在美国亚马逊上发表
已确认购买
I've tried many a henna brands, and I really like this one, I've been using it for years now. Here's what I've found works best: keep henna on hair for at least 2 hours, rinse it out with cold water, and don't shampoo your hair for a few days afterwards.
阅读更多
7 个人发现此评论有用
加入亚马逊Prime，从此免运费
亚马逊Prime会员可享海外购美/英/日/德跨境免邮，全年无限次！更有免费无限次阅读电子书服务
> 立即加入
了解我们
合作信息
帮助中心和购物指南