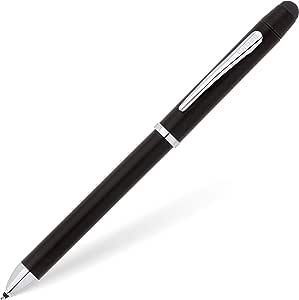 Whether you focus on the big picture, the details, or bothGCodo it all with Tech3. With a simple twist of the barrel, switch from black ink, to red ink, to pencil. Smoothly. Effortlessly. Stylishly. Continuous-twist technology makes cycling through your options easy and intuitive. Specially formulated Cross ink flows flawlessly for a superior writing experience. Includes 1 Black Medium Ballpoint Refill in pen, 1 Red Medium Ballpoint Refill, 5.5mm Pencil Leads and 1 Pencil Eraser.

Mechanism with continuous spin that allows for switching from one type of writing to another easily. Can also be used as a Stylus for your touchscreen device.

notaprofessional
5.0 颗星，最多 5 颗星 Instant Favorite
2017年2月3日 - 已在美国亚马逊上发表
颜色: 缎面黑色已确认购买
This pen is fantastic! I would not have chosen it for myself, but received it as a gift, then bought a second one for myself. Highlights follow.

[This is not a complaint because it wasn't a problem for me, but I would want to know about this particular item I received days ago--the one I'm reviewing on Amazon having purchased one here (as opposed to whatever others of this product I've seen around) came in a version of the standard gift-pen presentation box, but that box was in a matching cardboard sleeve; there was scotch tape all around the box and sleeve lengthwise, which would have been disappointing if I'd had it sent to someone, or even if I'd planned to wrap it as a gift because the sleeve tore when I removed the tape, so the whole "unboxing" was kinda clumsy.]

-With a twist, it goes from a black ballpoint to a red one, then again to a pencil.

-There's an eraser under the stylus tip. While I do not have much use for a stylus, it's visually pleasing to have that instead of the eraser on display unless you need the eraser.

-The mechanism is impressive. (Some reviews I've seen seem to indicate that it's worth making yourself get used to turning it the reverse way only to retract the writing tip into the pen--it's tempting to go backwards to the point you were using before, but some reports of the mechanism failing over time seem connected to people using that reverse twist (for retracting) by accident too often when trying to select a different point/color. I find it intuitive and easy to be cautious of this.)

-The inkflow from the refills that fit this pen is as smooth as any Cross I've ever used.

-It is possible to advance/retract the pencil lead without pressing on the stylus tip because that whole end of the pen is the thing that you move to click it--just think in terms of using two fingers on the sides of the pen you twisted to select the point rather than a thumb on the stylus covering the eraser.

-This pen is remarkably thin for so much function--not as slender as the traditional Cross ballpoints, but by no means fat. It has a nice heft and the satin/matte black finish is easy to grip. (I've not used the other, metallic colors.)

Anecdote: I got a version of this pen as a gift; it is my favorite because it was all matte black--this one has a metallic (chrome) clip and tip, but is a little bit less expensive and ships more quickly. After one day of using it at work, I was hooked. I loved how stealth it was, not calling attention to itself with bling, but so much more than a generic, disposable, black pen. After two weeks, a co-worker--who is notorious for never returning pens, but who is also kinda my boss and whom I like a lot--needed a pen and kinda seemed to be secretly coveting mine. Thirty minutes later, he was very sorry, but had taken a call while walking outside and lost it. He has ordered a replacement of the exact item he lost because he understood it was a real gem in the matte black, but the one he got ships from Japan and I got this one to temporarily replace it and serve as a backup going forward.

Disclaimer: I have been accumulating fine pens for decades and kinda got over Cross in high school. When I received this pen, I initially thought it was a sweet gift I would not likely use much--I tend to prefer writing with fountain pens and am fortunate to have some very nice ones. If the description and highlights seem like the answer to a need you have, I'd guess you need look no further. ;-)

Robert Mattes
5.0 颗星，最多 5 颗星 Superb pen
2018年7月6日 - 已在美国亚马逊上发表
颜色: 缎面黑色已确认购买
I've had this pen for over 2 years. I bought it after losing another multi-pen, and did a lot of research before purchasing. I really enjoy the pen and use it daily. It looks and works great.

The slim form fits easily in my shirt pocket with my phone. The ability to rotate CCW to hide a tip, then CW to retrieve the same tip is genius. Moving further CW rotates between tips. I mostly use the pencil, and this system makes it always available without going through the whole tip rotation every time. Same for sessions dominated by ink-pen use. The pencil eraser is nicely hidden under the screw-top stylus, protecting it well.

If I ever lose this pen (perish the thought), I'll jump on here and immediately buy another. It's that good!
阅读更多
7 个人发现此评论有用

Don
3.0 颗星，最多 5 颗星 Nice Multi Pen/Pencil but... Beware of Lifetime Warranty
2015年7月12日 - 已在美国亚马逊上发表
颜色: 缎面黑色已确认购买
Well this Pen has been both a blessing and a source of frustration. A blessing in that when it is working as designed it is a fine writing instrument. It was nicely balanced and wrote beautifully. Really like the pen and pencil features since I need both on a regular basis. A frustration because in my estimation the lifetime warranty as interpreted by Cross is not worth much. I now own two of pens in this style. One was given to me about 3 years ago by and provided reliable service during most of that time. That pen came with a more finished looking but decorative cover over the erasure and I actually prefer that look strongly over the current stylus version. Eventually the pencil advancing mechanism failed. Efforts to clear the lead initially would give momentary improvement but over time the advancing mechanism just stopped working entirely. This seem to be a common problem. What I have learned is that there is no way to replace just that part which I would gladly do. Instead my only choice is to return the pen to Cross at my expense and with $10 to cover their handling costs to have it repaired under a lifetime warranty. That seem to take several weeks and I could not seem to have any assurance my own pen would be returned. I wasn't thrilled to be out of my pen for that long. By my calculations this would also cost probably $13 to $15 dollars. A new pen offered immediate resolution, new ink refills and that is what I finally decided to do. I do not expect the new pen to hold up any better than the old unit but for the moment it resolves my pen dilemma. I actually looked for another multi pen unit that could replace my Cross but without success.

So when it works it will be great but just do not put much faith in the lifetime warranty.
阅读更多
19 个人发现此评论有用

What I like best about Cross Multipens is the fact that the company has figured out how to completely retract each point without having to the old trick of keeping the pen twisted “halfway”between any of the points, which is a major complaint with many of the Japanese twist multi-pens. The rubber stylus is somewhat of a weak point: You can point and push with it, but I personally have issues with things like “signing” a screen with one. Further, I think you have to order a whole new cap if the stylus ever needs to be replaces, but I’m not certain. That’s why I deducted one star, I would have preferred the old cap version for the Tech 3 pens.
阅读更多
4 个人发现此评论有用

Real Life Opinionated Consumer
4.0 颗星，最多 5 颗星 Near perfect
2019年2月5日 - 已在美国亚马逊上发表
颜色: 缎面黑色已确认购买
Much better build quality than the Pentel Vicuna it replaces. I prefer the metal weight & feel. My Pentel was already starting to crack. It's also slightly thinner. The Cross ballpoint is not as smooth as Pentel's hybrid ink. I may replace the Cross ink with that or the Pilot refils mentioned in other reviews as I run this one one out. It's also very similar to the Skillcraft B3 Aviator, but better. It operates better, has a more reliable pencil. Mostly though it's more balanced & a bit longer than the Skillcraft with makes it more comfortable to write with. Only a few dollars more and well worth it IMO.