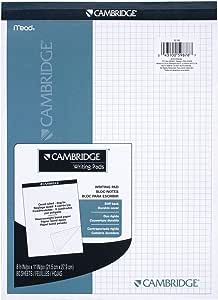 更多信息
我来补充
Would you like to tell us about a lower price?

- Ruled on both sides
- Tear-off from top
- Cardboard backing

AMPAD: This is by far the poorest quality pad of the bunch. Folded/wrinkled sheets, misprinted lines, misaligned grid (front-back on a single sheet as well as from sheet-to-sheet in the pad). That problem is compounded by the paper’s weight/thickness, which allows more transparency. That might be a good thing if you’re tracing, but even the lines from the back side of the sheet show through, thus obscuring the front-side's lines, and making tracing more difficult. The only good thing is how stiff the backing is (tie with Mead/Cambridge).

MEAD CAMBRIDGE: This was my runner-up pad. More sheets than Mr. Pad, gray lines make illustrations standout more than the brighter blue lines of Mr. Pad. Good number of sheets per pad, and very stiff back. It also features a fold-over cardboard cover, which none of the other pads have, which could be good for preventing smudges of drawings or confidentiality. Beneficially, that fold-over cover can be removed (it has perforations to tear it off).

MR. PAD: The clarity of the lines is good (strong). For my purposes, that's fine, though others may want their drawing to stand out more from the lines, in which case a gray or more subtle rule might be preferable. The backing isn’t as thick or robust as the others, but if you’re using the pad in a portfolio (like me), then this may not be a big deal. I also like how the sheets were cut so that the edges of the pad line up with the end of a square. No other pads have that attention to detail, and it just makes this pad look nicer than the others which all have partial squares at their edges.

AMAZON BASICS: I have no idea where they came up with the size of the squares. Six per fifteen-sixteenths of an inch (or five per 2 centimeter, but not exactly). Maybe I’m missing something here. The thickness of the back cardboard is nearly the same as Ampad and Cambridge, but it’s not as rigid/stiff.

For my use, I decided the Mr. Pad was the best way to go. I’ll be using the pad professionally, and want the tools of my trade to reflect how I practice: With precision. I don't need lots of sheets in a pad, since I less frequently hand-write notes and illustrations compared to dictation or typed.

vanbenneh
5.0 颗星，最多 5 颗星 Continual Purchase
2019年3月10日 - 已在美国亚马逊上发表
已确认购买
I go through about 2 notepads per semester. I've tried other graph paper and it's just too thin for my color code note taking method. This paper is thick enough where I only get ghosting on the other side and won't bleed through. I remove the paper and three hole punch it but even then I find the thick back to be helpful. I'm able to carry the notepad in my bag without it being ruined like tradition spiral notebooks. The upcharge, compared to other packs of graph paper, is worth the quality you receive with this brand. Not only does it not bleed through when highlighting but I am able to erase without tearing holes into the paper. I have erased massive amounts of pencil markings as well as frixon pen markings (thanks, math...) and it withstands the pressure and friction really well. I have never torn a piece making me more likely to erase instead of scrap a paper and starting over.
Highly recommend this purchase.
阅读更多
3 个人发现此评论有用

MissPammy
5.0 颗星，最多 5 颗星 Best paper ever!
2017年9月29日 - 已在美国亚马逊上发表
已确认购买
I have used these for years to keep track of my workload. The graph paper makes it easy to line up columns as well as rows, and the heavy weight of the paper makes it resistant to tearing. I love that the pages stay in the pad unless I want to remove them, and then they tear out cleanly. When I need to plan a visual, the paper is excellent for that too, because the graph allows me to sketch things to scale. Of all the pads I've ever used, this one is my all-time favorite. I will use them forever, as long as they are being made.
阅读更多
6 个人发现此评论有用

Alexandra M.
5.0 颗星，最多 5 颗星 My favorite way to take notes.
2017年7月25日 - 已在美国亚马逊上发表
已确认购买
Since taking organic chemistry and physics classes, I'm completely hooked on using quad ruled paper for everything. I have extremely terrible handwriting, and it at least keeps my scribbles in a neat fashion.

This notepad comes with a solid back that is fine without a clipboard, but I used one to hold down the flip up pages once I got deeper into the book.

I've seen a few reviews about perforation issues, and while I did rip a few page corners, generally if you take your time it is a clean rip... rather this than have pages fall out.

What I love most about this particular notepad compared to others is the grid lines are not too thin, not too thick, just right. You cannot see lines through the current page like some note pads. Also, I use thick gel pens (Piolet G2) and they do not bleed through.
阅读更多
6 个人发现此评论有用
加入亚马逊Prime，从此免运费
亚马逊Prime会员可享海外购美/英/日/德跨境免邮，全年无限次！更有免费无限次阅读电子书服务
> 立即加入
了解我们
合作信息
帮助中心和购物指南