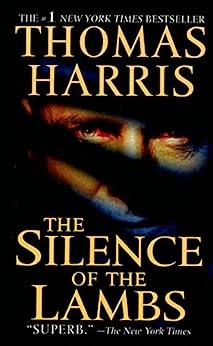 An ingenious, masterfully written novel, Thomas Harris's The Silence of the Lambs is a classic of suspense and storytelling and the basis for the Oscar award-winning horror film starring Jodie Foster as Clarice Starling and Anthony Hopkins as Dr. Hannibal Lecter.

A serial murderer known only by a grotesquely apt nickname—Buffalo Bill—is stalking particular women. He has a purpose, but no one can fathom it, for the bodies are discovered in different states. Clarice Starling, a young trainee at the F.B.I. Academy, is surprised to be summoned by Jack Crawford, Chief of the Bureau's Behavioral Science section. Her assignment: to interview Dr. Hannibal Lecter, a brilliant psychiatrist and grisly killer now kept under close watch in the Baltimore State Hospital for the Criminally Insane. Lecter's insight into the minds of murderers could help track and capture Buffalo Bill.

Smart and attractive, Starling is shaken to find herself in a strange, intense relationship with the acutely perceptive Lecter. His cryptic clues—about Buffalo Bill and about her—launch Clarice on a search that every reader will find startling, harrowing, and totally compelling.

From Publishers Weekly
In this thrillingly effective follow-up to Harris's masterful 1981 suspense novel Red Dragon, the heroine is new, but the villain isn't: Dr. Hannibal Lecter, the evil genius who played a small but crucial role in the earlier novel, returns, to mesmerizing effect. When a serial killer known as Buffalo Bill (he kidnaps, slays and skins young women) begins a crosscountry rampage, FBI trainee Clarice Starling tries to interview Lecter, a psychiatrist whose brilliant insights into the criminally insane are matched only by his bloodlusthe's currently imprisoned for nine murders, and would like nothing more than the chance to kill again. Lecter, a vicious gamesman, will offer clues to the murderer's pattern only in exchange for information about Clarice, analyzing her with horrible accuracy from the barest details. When Bill strikes again, the agent begins to realize that Lecter may know much more, and races against time and two twisted minds. Harris understands the crafting of literary terror as very few writers do; readers who put themselves in his good, coldblooded hands will lose sleep, and demand a sequel. 200,000 first printing; $200,000 ad/promo; BOMC main selection.
Copyright 1988 Reed Business Information, Inc.


From Library Journal
In this intelligent, fast-paced thrillerwhich is also brutal and gruesomeagent Clarice Starling of the FBI's behavioral science section is assigned to conduct a psychological profile of Hannibal Lecter, a psychiatrist imprisoned for serial murder. Uncooperative at first, Lecter then says he can help identify a serial killer who has eluded authorities for months. Lecter's aid proves invaluable, and Starling soon finds herself using one madman to catch another. Harris ( Black Sunday, 1975; Red Dragon , 1981) has written a story, although not for the squeamish, that is hard to put down. Lonnie Beene, West Texas State Univ. Lib., Caynon
Copyright 1988 Reed Business Information, Inc.

"A virtual textbook on the craft of suspense, a masterwork of sheer momentum that rockets seamlessly toward its climax... Harris is quite simply the best suspense novelist working today."-- The Washington Post

"A psychological thriller so deftly woven and gripping that a reader can hardly get through one sentence fast enough to discover what's in the next."-- Associated Press

“A virtual textbook on the craft of suspense, a masterwork of sheer momentum that rockets seamlessly toward its climax…Harris is quite simply the best suspense novelist working today.” ―The Washington Post

“A psychological thriller so deftly woven and gripping that a reader can hardly get through one sentence fast enough to discover what's in the next.” ―Associated Press

“A thriller to out-thrill all thrillers…impossible to put down!” ―Detroit News

“It's marvelous, the best book I've read for a very long time…It is infinitely superior to any novel published this year.” ―Roald Dahl

“The Silence of the Lambs will haunt for a long time; Harris places his clues and his carnage with precision.” ―Philadelphia Inquirer

“As remarkable as its predecessor…some of the most powerful and entertaining fiction of our time!” ―The Washington Post

“Without a doubt, [Harris is] one of the most powerful writers of suspense fiction today!” ―Milwaukee Journal

“Harris has once again hit us in the solar plexus. This is, in fact, a better read than Red Dragon, which is all you need to know…A page-turner, one of those books that, once picked up, becomes immediately addictive.” ―Cleveland Plain Dealer

“The plot unreels rapidly…Hooks the reader and keeps the tension taut until the end.” ―Portland Oregonian

“I read the first sentence of this book, threw up my hands and then stayed up all night to finish. It didn't matter, I've scarcely slept since.” ―Liz Smith

“One of the most gripping reads of the year.” ―Kirkus Reviews

“Thrilling effective…Harris understands the crafting of literary terror as very few writers do; readers who put themselves in his good, cold-blooded hands will lose sleep and demand a sequel.” ―Publishers Weekly

THOMAS HARRIS is the author of Black Sunday, Red Dragon, The Silence of the Lambs, Hannibal, and Hannibal Rising, all of which were national bestsellers.