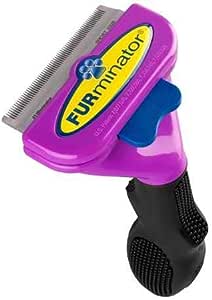 FURminator deShedding Tool for Cats (2.65" wide stainless steel deShedding edge) reduces shedding up to 90 percent by removing the loose, dead undercoat without damaging the topcoat. This tool is recommended for all shedding cats. We also have available a dog FURminator deShedding tool. FURminator deShedding tool helps to eliminate hairballs in cats, reduces shedding up to 90 percent, guaranteed to reduce shedding better than any brush, comb or rake, works great on all shedding, long and short haired cats, brings out the cat's natural oils, promoting healthier skin and a shiny topcoat and reduces the amount of airborne elements that cause allergic reactions in many people.

Elandwyn
5.0 颗星，最多 5 颗星 Worked much better than I thought!
2012年7月19日 - 已在美国亚马逊上发表
已确认购买
I have a short-haired, eleven year old tomcat who has never been brushed. It's not that I don't care about grooming him, it's just that I swear to God I never knew you were supposed to brush cats. Dogs, maybe; horses, sure! But cats? They spend all day cleaning themselves! He's never had a bath, either. Am I a bad cat mom?

So anyway I bought this brush because the cat developed a little bit of a rash on his lower back (upper tail?) and I thought it might be best if he didn't swallow so much hair while trying to scratch it.

When I took the brush out of the box, the first thing I noticed was that it's heavy. It feels well-made. The handle is comfortable, and it doesn't look like it's likely to break anytime soon. I gave it a trial run through my own hair (is that weird?), and came out unscathed. This product has been tested on people! It didn't pull a single hair out of my head. I don't know what that says about me.

As for the cat, he was very excited to find me sitting on the floor in the living room. When he came up to investigate, I surprised him by running the brush down his back. This might not be the best tactic if you have a cat who trusts you. After the initial "WTF" reaction, he settled in for a nice long brush. He'd wander away every few minutes then come back for more. When I was finally done (when the brush wasn't really pulling anything else out of him), I had a pile of fur big enough to construct a new cat. When I put the brush down on the floor to go get a trash bag, I returned to find him lying in the pile of hair, rubbing his face on the brush. The cat is super soft and after a day has stopped chewing on his butt. So it was a hit.

1. Do not brush your cat while wearing nice clothing. You'd think this would be common sense, but I am, apparently, an idiot.
2. Brush your cat outside, unless your cat likes to run away or your yard is infested with hawks or something.
3. Introduce the cat to the brush the way you'd introduce him to a new toy or a new husband.
4. Take pictures of the giant pile of fur that this brush produces.

Carly McKenzie
5.0 颗星，最多 5 颗星 Best brush and my cat loves it
2017年8月6日 - 已在美国亚马逊上发表
已确认购买
Best brush ever and totally worth the money. I read a lot of reviews before I purchased a brush and landed on this one. I was afraid of some of the people saying it was pulling/cutting the hair out and/or hurting my cat, but I have not experienced this at all.

The first time I used it, I swear she lost two cats worth of hair. I kept using it over the course of a few weeks when her shedding was at its highest, and more and more hair kept coming off her. It was insane!

Her coat is now silky soft and shiny. She LOVES getting brushed. It's almost a daily routine. I haven't found that it pulls out unnessecary hair that isn't loose. It literally just grabs the undercoat that is shedding and brushes it out. The button that pushes the hair off the brush is handy and it easily removes the hair with little effort.

Leela is a short haired black cat and doesn't have issues with hair balls or matting. I highly recommend and have seen major improvements in her coat over the last few months. It has also helped keep her hair off furniture and dust ball collections.
阅读更多

sqwirk
5.0 颗星，最多 5 颗星 Works great for short haired cats that have thick coats
2017年4月24日 - 已在美国亚马逊上发表
已确认购买
This is great for brushing my short hair cat. His hair is short but it's also thick, so there's a lot of shedding that goes on from layers of fur underneath the top of his coat. Regular brushes didn't get to the layers underneath unless I brushed him in the opposite direction of his fur (which he does not appreciate), so this is great. The button on it makes it super easy to release the fur. Some of it gets statically charged and clings to the brush but you can just grab and take it off.
阅读更多
10 个人发现此评论有用

Hannah
3.0 颗星，最多 5 颗星 Must buy!!!!
2019年7月8日 - 已在美国亚马逊上发表
已确认购买
My stubborn fur babies have never allowed me to brush them. They have run away from every other brush I’ve tried. Both seemed nervous about the Furminator at first but by day 3 of trying, both will lay down and purr while I brush them. I am SHOCKED at the amount of fur this brush takes off of my cats. I didn’t even know they had this much fur!

****UPDATE/WARNING!!!!
It is possible to over brush your cat. My cat loves being brushed with the Furminator. She will lay down next to the brush and meow and purr until you brush her. That being said, we’ve been brushing her a ton because she loves it so much. IT IS POSSIBLE TO OVERDO THIS!!!!!! She kept losing substantial amounts of fur each time we brushed her and the amount didn’t seem to taper off at all. We were shocked that she had so much hair to lose. Turns out- she didn’t. We aren’t sure if the Furminator is shaving her or what’s going on but there’s a few places where her fur looks super short and you can actually see her skin peeking through her fur on one spot in her back. USE WITH CAUTION
阅读更多

Amy C
5.0 颗星，最多 5 颗星 Works great with all sized cats! Highly recommend!!
2017年7月5日 - 已在美国亚马逊上发表
已确认购买
This was the best purchase ever!! I was extremely skeptical due to the price, but after reading all the reviews I took the chance and I'm glad I did. I will let the photo speak for itself (and my cat) to show the amount of hair that was taken from one side alone! As you can also see, he didn't mind the process at all! I've purchased a similar product in the past which looked the same, but seemed to do more pulling of his hair than removing shedding. This didn't seem to be the case at all with this tool.

I also want to add... I have a munchkin that is 2 pounds and it worked great on her, too. So, if you are a crazy cat lady like myself with multiple cats of different sizes.. this Large variety would work with all your cats.
阅读更多