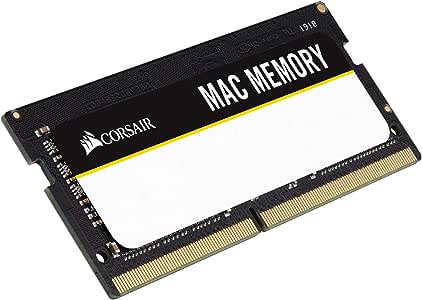 The tech specs listed by Apple say that this Macbook can only support up to 8GB of RAM, however this product does, and continues to, work as described on my macbook.

I would definitely recommend this to anyone who ones the same macbook as me, since I have first-hand experience that it does in fact support 16GB RAM.

* The only thing I would advise when considering whether or not to buy this product is to assess whether or not the slight performance advantage between 8GB and 16Gb is worth the price difference. Hope this helps!

* * I would also advise you to run many tests on the RAM upon installing it to make sure that it is properly performing.

Morphius
5.0 颗星，最多 5 颗星 FAKE memory chips, Wrong size and not real chips!!
2016年10月25日 - 已在美国亚马逊上发表
已确认购买
Update: 11-28-2016: I returned these chips to Corsair because Amazon would not accept them back, and i cannot say enough good about Corsair's customer service. Although it took a little time, despite the notion Corsair could not directly warrant them since they were counterfeit memory chips, Corsair still ended up warranting them, not leaving me hung out to dry.
The chips sent to me from Corsair are working fantastic! I really dig having 16Gb of memory in my MacBook pro. Makes a HUGE difference in the performance when running VM Fusion. What a difference!!!! Thank you so much Corsair for standing behind the name of your product and it is super disappointing that Amazon allowed fake chips to be sold.

THIS IS NOT REAL CORSAIR MEMORY!!!!!
I purchased this under the impression this was really Corsair memory. After installing the memory my computer would only recognize this as 4Gb chips, after struggling with this for a bit and finally taking it to a mac store, the chips were deemed to be incorrect. Of course, i was just outside of the time Amazon would allow for return so i had to go back to Corsair. I sent the chips into Corsair, after paying $90 for a new set with the understanding i would get the refund, Corsair came back and said these were not really Corsair chips to begin with and would not authorize reimbursement. Now i am out another $90!!!!!!
阅读更多

Kelly Ann
5.0 颗星，最多 5 颗星 This Saved My Macbook Pro (Early 2011)
2018年3月22日 - 已在美国亚马逊上发表
已确认购买
My Macbook Pro (13 inch, early 2011) works so much more smoothly now! Things don't load instantaneously or anything, but they are much faster and when they do open my laptop can handle multiple at a time! I see the spinning loading cursor much less often and my computer functions much more efficiently.

To give you an idea of the difference this makes, a few days before buying this, I had three windows open: Chrome, Word, and Spotify; my computer was working at a snail's pace and I could barely get anything done. I wasted almost an hour trying to open Word, look up instructions, open a file, and switch footnotes to endnotes.

When I first installed the new 16GB, I opened app after app until every single app on my dock was open and running (about 24 apps in all, including Word, Powerpoint, Spotify, Steam, iTunes, and the App Store, among others). Once they were all open, my computer was working so well that the fan wasn't even activated. I was using about 10 GB of memory or so, and using the apps was a breeze.

It was so easy to install too! I recommend looking up instructions online and maybe buying a tiny screwdriver if you don't already have one, but I had no issues and had replaced my old memory in less than 5 minutes.

I can't recommend this enough. However, if you only plan to be using your computer for things like email, social media, and so forth, I think the 8GB (2x 4GB) option would suffice. The reason I went for 16 is that I often do photo editing and digital art and wanted to be sure that these programs would function smoothly.

If anything changes with functionality, I'll update my review. But for now, I couldn't be happier. My laptop can multitask again!!
阅读更多

Frostacious
5.0 颗星，最多 5 颗星 THIS WORKS WITH NO HARDDRIVE UPGRADE REQUIRED
2018年10月5日 - 已在美国亚马逊上发表
已确认购买
I purchased this item as my Early Macbook pro 2011 was snail slow and not loading anything with 575GB of 750GB available. I followed all the steps online to make my computer faster but felt as if I was disabling features I love. Why have a lame computer SO I purchased this item and it's only been 2 days total with them in but as soon as I restarted my computer and it powered on for the first time in a long time, Word loaded quickly (30 seconds), Powerpoint loaded quickly (18 seconds), and firefox almost instantly which was such a relief. I want to start using VMware fusion again like before but let me tell you without a Harddrive upgrade like everyone does to Solid State Drive my laptop is still fast as heck, compared to where I used to take 45 minutes to save or update documents with the Rainbow wheel of death spinning to no end. I only wish I would have bought this sooner. I will update after using VMware fusion and Autocad for 3D modeling. If it can stand that then it's beyond 5 stars, if it can't I will lower accordingly. FYI OS is High Sierra and my screen shot shows the RAM Memory usage at 5GB plus. Crazy considering I only had 4GB before the upgrade which explains the slow system. DON'T BUY ONLY 8GB TOTAL GET THIS 16GB the computer can and will use it all and it's worth it. Don't cheap out. Apple's website lied to me saying 8GB max when in my photos you can clearly see it recognizes all 16GB. God bless and enjoy the speed freedom.
阅读更多

MildCritter
5.0 颗星，最多 5 颗星 They work, price is good
2019年1月18日 - 已在美国亚马逊上发表
已确认购买
I put a set of these in my 2011 MacBook Pro after a Crucial 4GB module failed, and they work perfectly. My machine is supposed to only have a max capacity of 8GB RAM, but evidently firmware upgrades have increased the RAM capacities of several older Mac models, mine among them. These had the best price of any I've found, and delivery was super quick.

If your computer seems to be functioning but won't run software packages that it ran previously, you might use memory check software and built-in diagnostics to check your RAM for errors. However, none of the tests I ran was definitive. I tried running the machine with one RAM module at a time. It refused to start with one of the modules. Case closed. Bought and installed the Corsair SODIMMs, and all's well.
阅读更多
1 个人发现此评论有用
加入亚马逊Prime，从此免运费
亚马逊Prime会员可享海外购美/英/日/德跨境免邮，全年无限次！更有免费无限次阅读电子书服务
> 立即加入
了解我们
合作信息
帮助中心和购物指南