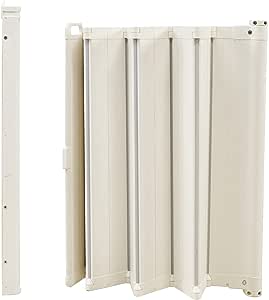 Guard me by baby dan the auto foldable safety guard. This revolutionizing safety guard is near to invisible when not in use. It folds back automatically. Idal for tight spaces. The basic pack covers openings from 21, 7 up to 35" extendable up to 44, 6" by the use of the separate available extend a guard.it can be mounted on the inside as well as the outside of a door frame. PVC free. Tested and approved to meet the newest standards. Patent pending. Tested and approved to meet the newest European and American Standard (ASTM f1004). Made in Denmark. Patent pending.

CM
5.0 颗星，最多 5 颗星 Gate plus two extension pieces
2017年8月24日 - 已在美国亚马逊上发表
已确认购买
I bought this gate to keep our two chihuahuas corralled inside our kitchen when we are gone. We were previously using the traditional wood and wire extension baby gate and it was cumbersome. This is so much better! It came today and I installed it within about an hour. I also purchased two extension pieces to make the gate long enough for our opening. Some people commented that the extensions keep the gate from folding flat and that isn't true. You just have to make sure you pay attention to the bends in the gate and insert the extensions accordingly. The instructions are only pictures, but I followed them okay.
阅读更多

We were looking for a gate to keep our little poodle who recently started having seizures from falling down the stairs to the basement as well as stopping our small nieces and nephews who have become more ambulatory of late. We considered several options, but none but this gate system met all that we were looking for. We needed it to not block access to the stairwell when opened, needed to be able to keep a <5 lb dog from slipping through, and needed to be safe enough that toddlers weren't going to easily figure out how to circumvent it.

This gate works well. It is unconventional in its approach but that is probably what makes it work so well. It can be mounted both inside or outside on the 'face' of the stairwell. Since our stairs to the basement don't have a door, and we didn't want to lose any of the 4' width we specifically built with for moving furniture and large objects up and down the stairs, this was important to us.

For that reason, we went beyond the specifications on width for face mounting, ordering 2 extenders and using all the included extension pieces; I have to say it works fabulously. I was a little concerned about it given the manufacturer states a maximum width of 40.7" when mounted outside a door frame, but looking closely at the design before ordering I decided to take the chance. We are getting roughly 51" of width out of it, with not enough gap when the gate is pushed on for a small toddler to wriggle down onto the stairs or the small dog to fall into the gap, but still maintaining the flex it is supposed to have. While I don't think you could extend this infinitely, I am not concerned at all about the fact that BabyDan doesn't call out being able to go this wide. I cannot perceive any difference in function or safety mechanisms going this wide, but obviously you should always be careful if you're pushing a product beyond its documented limits.

Opening the gate definitely stumped the older kids at first, but we've all been able to open it single handed with no real issues, even our 12 year old, which is important since his room is in the basement.

I found installation to be super simple, though the instruction manual definitely needs some work. The design is simple enough to understand I didn't end up using it. I get the idea of trying to be 'universal' so you have a thinner manual, but the pictures do not speak a thousand words in this case, or if they are speaking, it isn't English :-). SOME words to explain what was being depicted would go a long way to helping articulate some things, like 'skip ahead to this page for this width of gate'. I've never bought anything from an Ikea, but if this is the Ikea instruction philosophy, I likely won't. This was not a good customer experience from the angle of the manual. Fortunately, anyone with a modicum of handiness and understanding of putting together home products will see how this goes together right away and wonder why the manual was even included.

The brackets are very cleverly designed so that there are holes for both the inside and outside mounting options, and the plastic is very sturdy and strong. The only possible weak point I see in the design (outside of installation mistakes) is the gate itself is attached to the fixed side with what I call a square receiver nut. When you slide the gate into the fixed end, there is a square hole on the gate you must align to a square hole on the bracket, and then fit the receiver nut into that square hole and run a small screw into it from the other side of the gate to lock it into the mounting bracket. I have seen designs like this on other products that move around a lot work loose over time. A sparsely threaded squared bolt with a locking nut would perhaps have been a better design choice. I'm hoping that the testing BabyDan shows on their website has been employed on this element to see the effect of thousands of swings of the gate and whether that screw can come loose over time. This wasn't enough of a concern for me NOT to install the system, however.

The only piece I found fault with outside the manual was the length of the screws that come for attaching to the wall -- they need to be longer, perhaps a 2.5" minimum as opposed to the 2". I replaced them with 3" screws to get enough purchase on the studs to make me comfortable that it was going to stay rock solid and not work its way out of the wall over time.

When we have to start worrying about the grandkids getting around, I will likely purchase another unit for the stairwell leading to the second story, I like this so much. Very good product. Would suggest they do testing at > 48" for American homes that typically have wider staircases required by building codes.