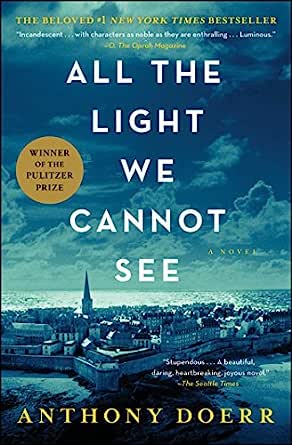 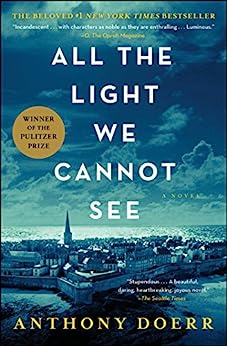 All the Light We Cannot See: A Novel (English Edition) Kindle电子书

All the Light We Cannot See


Marie-Laure LeBlanc is a tall and freckled six-year-old in Paris with rapidly deteriorating eyesight when her father sends her on a children’s tour of the museum where he works. The guide is a hunchbacked old warder hardly taller than a child himself. He raps the tip of his cane against the floor for attention, then leads his dozen charges across the gardens to the galleries.

The children watch engineers use pulleys to lift a fossilized dinosaur femur. They see a stuffed giraffe in a closet, patches of hide wearing off its back. They peer into taxidermists’ drawers full of feathers and talons and glass eyeballs; they flip through two-hundred-year-old herbarium sheets bedecked with orchids and daisies and herbs.

Eventually they climb sixteen steps into the Gallery of Mineralogy. The guide shows them agate from Brazil and violet amethysts and a meteorite on a pedestal that he claims is as ancient as the solar system itself. Then he leads them single file down two twisting staircases and along several corridors and stops outside an iron door with a single keyhole. “End of tour,” he says.

A girl says, “But what’s through there?”

“Behind this door is another locked door, slightly smaller.”

“And what’s behind that?”

“A third locked door, smaller yet.”

“A fourth door, and a fifth, on and on until you reach a thirteenth, a little locked door no bigger than a shoe.”

The children lean forward. “And then?”

“Behind the thirteenth door”—the guide flourishes one of his impossibly wrinkled hands—“is the Sea of Flames.”

“Come now. You’ve never heard of the Sea of Flames?”

The children shake their heads. Marie-Laure squints up at the naked bulbs strung in three-yard intervals along the ceiling; each sets a rainbow-colored halo rotating in her vision.

The guide hangs his cane on his wrist and rubs his hands together. “It’s a long story. Do you want to hear a long story?”

He clears his throat. “Centuries ago, in the place we now call Borneo, a prince plucked a blue stone from a dry riverbed because he thought it was pretty. But on the way back to his palace, the prince was attacked by men on horseback and stabbed in the heart.”

“Stabbed in the heart?”

“The thieves stole his rings, his horse, everything. But because the little blue stone was clenched in his fist, they did not discover it. And the dying prince managed to crawl home. Then he fell unconscious for ten days. On the tenth day, to the amazement of his nurses, he sat up, opened his hand, and there was the stone.

“The sultan’s doctors said it was a miracle, that the prince never should have survived such a violent wound. The nurses said the stone must have healing powers. The sultan’s jewelers said something else: they said the stone was the largest raw diamond anyone had ever seen. Their most gifted stonecutter spent eighty days faceting it, and when he was done, it was a brilliant blue, the blue of tropical seas, but it had a touch of red at its center, like flames inside a drop of water. The sultan had the diamond fitted into a crown for the prince, and it was said that when the young prince sat on his throne and the sun hit him just so, he became so dazzling that visitors could not distinguish his figure from light itself.”

“Are you sure this is true?” asks a girl.

“The stone came to be known as the Sea of Flames. Some believed the prince was a deity, that as long as he kept the stone, he could not be killed. But something strange began to happen: the longer the prince wore his crown, the worse his luck became. In a month, he lost a brother to drowning and a second brother to snakebite. Within six months, his father died of disease. To make matters even worse, the sultan’s scouts announced that a great army was gathering in the east.

“The prince called together his father’s advisers. All said he should prepare for war, all but one, a priest, who said he’d had a dream. In the dream the Goddess of the Earth told him she’d made the Sea of Flames as a gift for her lover, the God of the Sea, and was sending the jewel to him through the river. But when the river dried up, and the prince plucked it out, the goddess became enraged. She cursed the stone and whoever kept it.”

Every child leans forward, Marie-Laure along with them.

“The curse was this: the keeper of the stone would live forever, but so long as he kept it, misfortunes would fall on all those he loved one after another in unending rain.”

“But if the keeper threw the diamond into the sea, thereby delivering it to its rightful recipient, the goddess would lift the curse. So the prince, now sultan, thought for three days and three nights and finally decided to keep the stone. It had saved his life; he believed it made him indestructible. He had the tongue cut out of the priest’s mouth.”

“The invaders came,” says the warder, “and destroyed the palace, and killed everyone they found, and the prince was never seen again, and for two hundred years no one heard any more about the Sea of Flames. Some said the stone was recut into many smaller stones; others said the prince still carried the stone, that he was in Japan or Persia, that he was a humble farmer, that he never seemed to grow old.

“And so the stone fell out of history. Until one day, when a French diamond trader, during a trip to the Golconda Mines in India, was shown a massive pear-cut diamond. One hundred and thirty-three carats. Near-perfect clarity. As big as a pigeon’s egg, he wrote, and as blue as the sea, but with a flare of red at its core. He made a casting of the stone and sent it to a gem-crazy duke in Lorraine, warning him of the rumors of a curse. But the duke wanted the diamond very badly. So the trader brought it to Europe, and the duke fitted it into the end of a walking stick and carried it everywhere.”

“Within a month, the duchess contracted a throat disease. Two of their favorite servants fell off the roof and broke their necks. Then the duke’s only son died in a riding accident. Though everyone said the duke himself had never looked better, he became afraid to go out, afraid to accept visitors. Eventually he was so convinced that his stone was the accursed Sea of Flames that he asked the king to shut it up in his museum on the conditions that it be locked deep inside a specially built vault and the vault not be opened for two hundred years.”

“And one hundred and ninety-six years have passed.”

All the children remain quiet a moment. Several do math on their fingers. Then they raise their hands as one. “Can we see it?”

“Not even open the first door?”

“So how do you know it’s really there?”

“You have to believe the story.”

“How much is it worth, Monsieur? Could it buy the Eiffel Tower?”

“A diamond that large and rare could in all likelihood buy five Eiffel Towers.”

“Are all those doors to keep thieves from getting in?”

“Maybe,” the guide says, and winks, “they’re there to keep the curse from getting out.”

The children fall quiet. Two or three take a step back.

Marie-Laure takes off her eyeglasses, and the world goes shapeless. “Why not,” she asks, “just take the diamond and throw it into the sea?”

The warder looks at her. The other children look at her. “When is the last time,” one of the older boys says, “you saw someone throw five Eiffel Towers into the sea?”

There is laughter. Marie-Laure frowns. It is just an iron door with a brass keyhole.

The tour ends and the children disperse and Marie-Laure is reinstalled in the Grand Gallery with her father. He straightens her glasses on her nose and plucks a leaf from her hair. “Did you have fun, ma chérie?”

A little brown house sparrow swoops out of the rafters and lands on the tiles in front of her. Marie-Laure holds out an open palm. The sparrow tilts his head, considering. Then it flaps away.

One month later she is blind. --此文字指其他 kindle_edition 版本。

'Far more than a conventional war story, It's a tightly focused epic … Doerr paints with a rich palette, using prose that resonates deeply and conveys the ephemera of daily existence along with high drama, sadness and hope … A bittersweet and moving novel that lingers in the mind' Daily Mail

‘An epic work about bravery and the power of attachment’ Rose Tremain, Observer, Books of the Year

‘An epic and a masterpiece’ Justin Cartwright, Observer

‘This novel will be a piece of luck for anyone with a long plane journey or beach holiday ahead. It is such a page-turner, entirely absorbing… magnificent’ Guardian

‘Boy meets girl in Anthony Doerr’s hauntingly beautiful new book, but the circumstances are as elegantly circuitous as they can be’ The New York Times

‘I’m not sure I will read a better novel this year … Enthrallingly told, beautifully written and so emotionally plangent that some passages bring tears’ Washington Post

‘This jewel of a story is put together like a vintage timepiece … Doerr’s writing and imagery are stunning. It’s been a while since a novel had me under its spell in this fashion.’ Abraham Verghese

‘A dazzling, epic work of fiction. Anthony Doerr writes beautifully about the mythic and the intimate, about snails on beaches and armies on the move, about fate and love and history and those breathless, unbearable moments when they all come crashing together.’ Jess Walter

Anthony Doerr is the author of four books, The Shell Collector, About Grace, Four Seasons in Rome and Memory Wall. Doerr's short fiction has won three O. Henry Prizes and has been anthologized in The Best American Short Stories, The Anchor Book of New American Short Stories, and The Scribner Anthology of Contemporary Fiction. He has won the Rome Prize, and shared the New York Public Library's Young Lions Fiction Award with Jonathan Safran Foer. In 2007 Granta placed Doerr on its list of the "21 Best Young American novelists." Doerr lives in Boise, Idaho, with his wife and two sons.