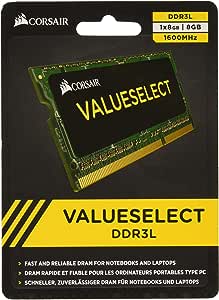 A_Reader
5.0 颗星，最多 5 颗星 Works as described and expected
2019年3月5日 - 已在美国亚马逊上发表
已确认购买
The memory works fine, however I am writing about my experience adding the memory to my laptop (I hope, it helps somebody to avoid the same issue)
I had a very slow Dell latitude E6510 running windows10 (32 bits) with a 4Gb maximum supported memory. I could not use the laptop because it was too slow, so I decided to add more memory, anything beyond 4Gb requires to install Windows 10 (64 bits) . I did install the 64 bits version of windows and installed the new memory. Upon rebooting, the memory was correctly reported on the system configuration however the laptop was not usable, windows would not restart. I did some research and found out, I had not upgraded the laptop's BIOS (ever!), I was using a version A03 (from 2011, I believe) when the current version available is A17. I went to the Dell support and downloaded the most recent BIOS which failed to install because the BIOS present was really too old, it required first for me to upgrade to the version A09 (Also found on Dell's support site) and then after that, I could finally applied the version A17.
After doing the BIOS upgrade, I restarted the system and all worked fine, Windows 10 ran, the system reports and uses the 8Gb of memory and the system works considerably faster.
I am a happy customer!

I've purchased Corsair before and never had a problem. However this time around I purchased the "Corsair 8GB Module DDR4 2133MHz Unbuffered CL15 SODIMM" and it is NOT compatible with Lenovo ThinkPad 13. (I specifically have the 1st Generation version of the ThinkPad 13. Maybe it's compatible with the 2nd Gen version; but I doubt it.) The incompatibility is not immediately noticeable; laptop boots into your OS without an issue (was able to dual boot Linux Mint and Windows), you can open browsers, other programs, folders, etc. BUT...

Windows 10 Pro - Handled this incompatible RAM much better than Linux. OS, Firefox, Chrome and Explorer freezing and crashing happened less often. But with enough time they did still happen.

If you are looking to upgrade the RAM for your Lenovo ThinkPad 13 I suggest using "Crucial's RAM/Memory Compatibility Finder".

Sure, I could have bought a single 4 GB SO-DIMM, but it wouldn't have saved me all that much money, and when possible I like to run matching memory modules in my machines.

I also could have paid one and a half times as much for a different set touting itself as specifically-designed for ASUS' U-series and their ilk, but considering that I paid less than five hundred bucks for the U32U when it was new, Corsair's comfortably-priced ValueSelect option seemed worth a try.

Corsair's packaging was clearly labeled and easy to open. I don't usually comment on packaging in product reviews, but it seems relevant here: the manufacturer's packaging for this upgrade kit is designed so you don't have to wave sharp objects around to extract your new memory modules, nor do you have to worry about getting label adhesive on your fingers and transferring it onto the precious cargo within.

A little round sticker at the top of the box kept it closed; I just ripped that whole part of the box off and went to town. Inside, the memory modules were packaged in a little two-piece plastic shell that came apart easily with finger pressure while still keeping the modules contained until I was ready for them.

The modules themselves are pretty much your standard DDR3 SO-DIMMs: green circuitboard, gold pins, bunch of black chips. They feel nice and rigid, with just enough flex to help get them in and out of their seats. They're definitely pretty durable (they certainly withstood the abuse they took during installation).

I don't particularly love the giant sticker that covers the whole front side of each module, but it doesn't appear to impact performance in any way, so I'm not knocking off a star for that. Maybe if I could knock off a quarter of a star, I would, but that's mostly a matter of taste. For all I know, it might actually serve some purpose (maybe it's glued on with cooling paste, or something?).

Installation was a pain in the neck, but that's not Corsair's fault -- it's a function of the way the clamps that hold the modules are arranged in my particular machine. Your installation experience will vary based on the design of your particular computer. If one or more of the modules is seated incorrectly, of course, the machine won't boot, leaving you to pop the cover back off and fiddle with it some more. Once the modules were properly seated (after much grumbling, dramatic sighing, and gnashing of teeth), my previously-wheezy old notebook booted right up.

I expected a performance boost, but was actually really surprised by exactly how significant a boost I got.

The U32U-ES21 was never intended to be a high-powered machine, but it's much, much quicker and more fun to use now. MS Office applications pop right up; Chrome runs like ... well, if not a cheetah, at very least a pretty fast pony; even a concurrent session of Photoshop, Pidgin, and a handful of Chrome windows flows along swimmingly.

I guess I'll have to find a new window in my day for making a cup of tea; I no longer even remotely have time to do it while Photoshop launches. Meanwhile, Sims 2 and Sims 3 are significantly less slow, if not exactly blazing fast.

In short, and perhaps rather obviously, dropping in 8 gigs of shiny new RAM won't turn your lazy old work mule of an notebook into a blazing gaming hoss. It can make you feel like you've got a whole new, much-peppier mule, at any rate -- and, in my case, I got a much peppier new mule than I was expecting, which is really quite nice.

For about fifty bucks (at the time of purchase) with fast Prime shipping, I'm very happy with it.

Full disclosure: one of my first "real" jobs was working in ASUS' tech support center; Corsair was one of the brands of RAM we routinely recommended for its reliability based on our experiences kludging together various motherboards and so forth that we got to build up in-house so we'd know what our callers were facing. That certainly influenced my purchasing decision. However, I have long since wandered away from the hardware-support world (though I do still do some tech-oriented work), and I paid Amazon's full price for this upgrade kit.
阅读更多
6 个人发现此评论有用

Rob
1.0 颗星，最多 5 颗星 Not reliable product
2018年10月16日 - 已在美国亚马逊上发表
已确认购买
Product arrived within allotted time (amazon prime), packaged well and as stated. However, it was defective. As soon as I installed it (Single 8 GB DDR4 Module) into my laptop I started to get random BSOD and artifacts on my desktop. Reseated and tried again. Same thing. Ran it for a week with this memory installed before removing it permanently. As soon as I did, my laptop ran just fine with zero BSOD.