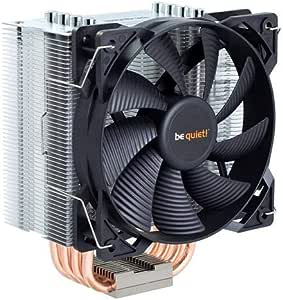 With Pure Rock, be quiet! presents a CPU cooler series aimed at the Essential category of PC systems. Bringing be quiet!'s award-winning technology to quiet multimedia and graphics systems, and entry level computers of all types, be quiet! Pure Rock delivers an exceptional price-to-performance ratio. Pure Rock's compact design is compatible with all current Intel and AMD sockets and fits well into tight spaces. Put famous be quiet! technology into your PC today for low noise operation and maximum of cooling performance at entry level segment.

Clarence K
4.0 颗星，最多 5 颗星 Very quiet fan, but on AM4 can't blow air out towards back
2018年7月14日 - 已在美国亚马逊上发表
样式: 150W已确认购买
Cools very well and fan is very quiet. I bought this brand specifically because I had previously used a be quiet fan and know they have good acoustics. However, I took one star off because this cooler's mounting only let's you face the fan either upwards or downwards, not the correct direction of blowing air from the RAM sticks out the back of motherboard. I learned afterwards others complain about this same problem on AM4 boards. As I have closed my top case, I chose to have the fan blow downwards towards my GPU(!), but there's a front fan that then blows the air out back so my temps have been fine. That said, I will eventually replace this with a Noctua fan when I also upgrade my GPU to 1080Ti as then temps may become an issue.
阅读更多

Now the Cons
Although it may look awesome the install was a total joke. I have installed hundreds of cpu cooling fan without the headaches I had of this one. First the instruction manual is a joke and isn't helpful in the least. I had to go on youtube to watch their video to even get a basic idea but that still was a joke and only shows 1 Intel installation and 1 AMD installation but not for each different socket type, And to find a better set of instructions on the internet is like pulling teeth. Next Be sure you tape your back plate on or else the problems arise even farther. The little washers that they provide and need to be installed for AMD were a nightmare to keep in place. Don't forget going by the video and instruction manual you need the thin washers and then the riser spacers together which I couldn't understand why they didn't just make the riser spacers that extra length to compensate for the washers to begin with. Well so I thought until I got to the point where I had just finished installing everything, Then noticed the whole unit just wiggled and moved around on the processor with ease. So I then had to remove everything to remove the thin washers. Then you have the long mounting screws that for the life of me wouldn't screw tight no matter whats done. You will need a shorter screw driver with a proper sized phillips tip or else they will strip out easily. Even then it's bound the mounting hardware will still be loose. The aluminum mounting hardware screwed down tight then after all this is when I realized it's better to remove the thin washers to keep a proper tight fit to sit the shroud down onto the processor properly or else it just wiggles all over the place.

At first glance of taking this CPU Cooler out of the box I was going to purchase another one for an AM4 system I just built but now after this crazy nightmare of an install I wouldn't recommend it to my worst enemy.

* Excellent cooling capacity. Keeps my i7-6700 at 19-23C at idle, and 49C-52C at load.
* Very quiet under normal operation, and even full fan speed is just a pleasant hum. (Granted, this is inside a Fractal Define C with all sorts of noise dampening too)
* Dirt cheap
* Push-pin Intel mounts by default, basically no assembly for the cooler itself other than attaching the fan and installing it onto the motherboard.

* Heatsink fins are super thin, so if you have to grab onto a piece of the cooler to get enough leverage to put the fan clips on, you have to be *super careful* to not let it be a hot-dog slicer for your fingers. The fins are also very malleable, and if you don't get the clips for the fan into the fins' gaps just perfectly, you'll likely bend them. None of the above have ever been an issue whatsoever on other budget coolers from Cooler Master, for example.
* Pre-applied paste is garbage. I've used 3 of these fans on 3 recent builds, and every single one also came with little flakes/strands of cardboard fiber stuck into the paste. The temps I mentioned above were achieved with Arctic Cooling MX-4, stock paste temps were roughly 5-10C higher at any given time.

This cooler is a no-brainer for value and performance. My first use of one was to replace an aging Corsair H55 that had some pump issues, and I was thoroughly surprised to see a $30 budget, silent cooler basically keep pace with a closed loop AIO at its prime. Just be extremely careful during installation due to the heatsink fin sharpness & malleability, don't use the stock pre-applied paste, and you'll have an absolute winner in your hands.
阅读更多
3 个人发现此评论有用
加入亚马逊Prime，从此免运费
亚马逊Prime会员可享海外购美/英/日/德跨境免邮，全年无限次！更有免费无限次阅读电子书服务
> 立即加入
了解我们
合作信息
帮助中心和购物指南