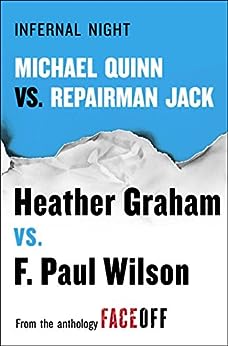 Jules Chastain, the last surviving member of a wealthy New Orleans family, has a problem. And he’s hired Repairman Jack to fix it.

It seems that Chastain “appropriated” an artifact from a fellow collector, Madame de Medici, and she wants it back. But the item—an ancient ring—is located somewhere in the family mausoleum and Chastain is too terrified of the wrath of his enemies to even leave his house to look for it. Meanwhile, Michael Quinn, himself a bit of an independent contractor, is waiting in the mausoleum when Jack arrives. And it’s Quinn—whose day job at The Cheshire Cat curiosity shop in New Orleans has made him familiar with mystical objects—who tells Jack that they are dealing with more than just a ring. They’re dealing with one of the Seven Infernals. Which means a simple retrieval job just got much more dangerous.

There's honestly not much to it (even taking my time it only took me around 20 or so minutes to finish) and pretty much felt like it was over with before it began. I decided to give it a try only because I'm familiar with Michael Quinn from Heather Graham's "Cafferty & Quinn" series. However, I have to admit that I liked F. Paul Wilson's Repairman Jack better. He just seemed to have a dry wit that appealed to me and more personality than Quinn evinced.

The story itself was okay but nothing I'd really recommend or want to read again. It wasn't at all predictable, which was its one saving grace if you ask me. The ending was not what I expected either and there was a twist or two along the way that kept it from being a complete waste of time. Still, unless you're familiar with either of these two men and the series they star in, I think most people will be disappointed... and even then $0.99 is asking too much.

James Tepper
3.0 颗星，最多 5 颗星 Very short and just OK team-up between Jack and Quinn
2015年9月14日 - 已在美国亚马逊上发表
已确认购买
INFERNAL NIGHT is (I believe) the first short story collaboration between F. Paul Wilson and another author that pairs FPW's Repairman Jack with the other author's hero, in this case, Heather Graham's Michael Quinn, the detective half of Graham's Cafferty and Quinn series of paranormal (Quinn was brought back from the dead and Caffetry owns an antiques shop that deals in "unusual" items) detective novels. In this very short story (38 pages), Jack takes a case from a rich eccentric who flies him down to New Orleans (Cafferty and Quinn's home turf) on what seems a simple case, that he takes only because he's bored since Gia and Vicks are visiting relatives in Iowa. Of course, nothing is a simple as it seems and Quinn and Jack discovers that they are both being scammed.

It's not bad, but it's just too short to be able to sink one's teeth into fully, regardless of price ($0.99). I didn't get any sort of feeling for what kind of character Quinn really is, or what it might be like to read more of the Cafferty and Quinn series. This is in sharp contrast to a subsequent pairing of Jack and super spy Codename: Chandler in the novella CODENAME:CHANDLER:FIX, by FPW, JA Konrath and Ann Peterson, that gave insight into both Jack and Chandler's personalities and modi operandi.

The best thing about INFERNAL NIGHT is hinted at by the title, and will only make sense to fans of Repairman Jack. For us, it was a lovely bit that filled in a bit more of the Secret History of the World long after I thought I had seen the last of it. That's about as specific as I can get without a spoiler alert.

Jack shook his head. “If you know someone’s thoughts, they can’t hide anything from you. The truth can be ugly, and it can hurt, but knowing what’s really going down is better than getting the shaft.” Quinn couldn’t disagree. The advantage in any relationship, business or personal, was obvious.

Quinn shrugged. “Well, like I told you, I was a cop once. Still work with them— with one great cop, an old partner, Larue. He doesn’t want me to explain things like curses and Infernals— he just wants me to take care of them.”

I will re-read this story and always look forward to, pre-order when possible, new works by these authors.
阅读更多

Adam
3.0 颗星，最多 5 颗星 Brief Decent Short Story
2020年8月13日 - 已在美国亚马逊上发表
已确认购买
it is a decent short story which events get a brief mention in a latter Repairman Jack novel. Worth reading if your a RJ fan. Haven't read any of Quinn's novels.
阅读更多