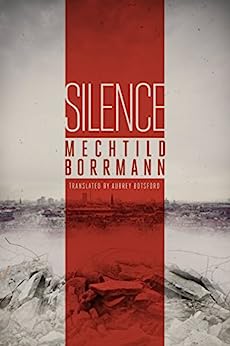 August 1939: six young people band together in the face of war-torn Germany, their friendship about to be put on trial as they land on opposite sides of World War II. Flash forward to November 1997: Robert Lubisch brings the group back together for the first time in decades to investigate a tragic family secret. Trust is shattered when one of the friends turns up murdered, leaving all of them guilty until proven innocent.

Winner of the 2012 Deutscher Krimi Prize for best crime novel.

Moonyeen Albrecht
5.0 颗星，最多 5 颗星 Kudos for "Silence"
2017年10月8日 - 已在美国亚马逊上发表
已确认购买
This is the first time I have written an on-line review for a book but I must let others know how wonderful this book is. Although it is presented in a translation from the German (I think the original was in German) the writing is beautiful, descriptive but still "economical" with words, flowing prose and a joy to read. The story is totally captivating and I did not see the surprises that unfolded in the last pages, but they make so much sense. I must read this again! This is a truly beautiful book about love, friendship, social challenges and a solid mystery that keeps one reading page after page in anticipation of what will be exposed on the next page. I highly recommend this book!
阅读更多

Kindle Customer
5.0 颗星，最多 5 颗星 Excellent
2016年10月18日 - 已在美国亚马逊上发表
已确认购买
I choose the books I read for superficial and often stupid reasons. In this case, I didn't think about the fact that this was originally published in German. I was amazed by the fantastic quality of the translation. The original story was exceptional. The translation kept the quality high. Having read books originally written in other languages, I am aware of how hard that is to do.
The story moves quickly. There are lots of surprises. The relationship between a murder in the 1950's and another in the present is the premise of the whole thing. It holds your interest really well. This story is well worth reading.

Avid Whodunnit Reader
5.0 颗星，最多 5 颗星 At last, a serious mystery book which is also very readable.
2015年5月18日 - 已在美国亚马逊上发表
已确认购买
SILENCE is one of the best books I have read recently. It s beautifully written (in English Translation), and the characters were sympathetic. The style of mystery is fairly low key, some violence that helps the story along, and the denouement is well brought about with all clues finally answered.Towards the end, I did get some idea of the ending, but not altogether, and that is great with me.
The settings were Germany in the past and the present, and the depictions of war were credible without overwhelming the essential theme of the story. I hope to read more stories of this caliber by this author..
阅读更多
23 个人发现此评论有用

Amazon Customer
5.0 颗星，最多 5 颗星 Silence is a book not to be missed.
2017年9月16日 - 已在美国亚马逊上发表
已确认购买
Another fascinating study of the seemingly endless consequences of Nazi evil. Ms. Borrmann skilfully intertwines the history of two murders committed 38 years apart. Both crimes spring directly from that evil. The characters and their motives are revealed with consummate skill in some of the most beautiful prose it has been my pleasure to read. I can scarcely believe that the book was first written in German. I cannot praise this work too highly. Ken Langdon
阅读更多
2 个人发现此评论有用