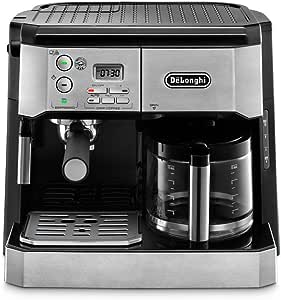 Lauren Mosesman
5.0 颗星，最多 5 颗星 Makes delicious coffee!!
2017年9月29日 - 已在美国亚马逊上发表
尺寸: 10 cup已确认购买
For some time I've had the minipresso espresso maker because I wanted to start making my own lattes. After awhile it became tedious to make two shots with that thing and quite the cleanup, so I started looking for an espresso maker. My wife likes to make regular drip coffee, and I thought it'd be nice to find a machine that makes both drip and espresso, alas we come across this machine. Now we're both super big on reviews, and the 3.5 stars kind of made us hesitant, but we said screw it, let's give it a try. Let me tell you, this machine is wonderful.
The 1-4 cups feature that strengthens the coffee and makes it more aromatic REALLY WORKS. My wife says she hasn't had better coffee, and she's even had it black (which she never does) ((We use the Lavazza Caffe Espresso ground coffee if anyone's interested)). On the espresso side, it works and makes great espresso with nice crema and is very easy to load in two shots. Despite what people say, the instructions really are straightforward if you just READ THEM. I use the steaming spout as well and it works as planned if you just follow the instructions. I've since made some very delicious cappuccino's/lattes and everything is quite easy and quick to use. Now I've only had for a couple days, and I can't speak for the durability part. Everything works as expected so far, and I'm worried based on other reviews about the fragility of the pieces. But if anything happens to break I'll have to come back and update my review.
TL;DR - if you want to feel like you have barista skills but really don't and want to make delicious fancy drinks, 5 stars.
- if you want the capability of making drip coffee that tastes better than normal and espresso at the same time, 5 stars.
- if you're already a pro barista and want to complain that it doesn't "meet up to standards," probably 1 stars.

UPDATE: Have had it almost 4 months. NOTHING has broken, NO leaks, and everything works exactly as when we got it. Still making coffee that I like better than Starbucks and several other local coffee shops.

Wowzers
1.0 颗星，最多 5 颗星 I do not recommend wasting the $200+ on this machine
2018年5月31日 - 已在美国亚马逊上发表
尺寸: 10 cup已确认购买
I do not recommend wasting the $200+ on this machine. We only had it for 6 months when it started acting up. The coffee grounds and water were brewing and spilling all over the counter top. We had several ppl look at it, cleaned it thirilly, troubleshooting, ect. It was defective. We also bought the 4 year warranty to go w it, DO NOT BUY! The warranty was worthless. I called Delonghi directly and they would not help me, replace or refund me the money back . All I wanted to was to exchange for another one and they were not willing to do that. The only thing they were willing to do was send me trouble shooting videos by email...Are you kidding me?! This was the worst experience ever w this Delonghi co, the 4 year warranty was a waste of money, DONT BUY! My cheap $20 Mr.Coffee held up better over the years than this thing! I will never purchase another product from this co based on the horrible customer service alone.
阅读更多
218 个人发现此评论有用

Julie J
1.0 颗星，最多 5 颗星 A total rip-off
2018年8月25日 - 已在美国亚马逊上发表
尺寸: 10 cup已确认购买
The coffee function works fine. The espresso doesn't heat up either the coffee, nor the milk beyond lukewarm, even with an hour pre-heat. After I make a latte, I have to put it in the microwave to get it to the desired temperature.The device leaks like crazy, there is no adjustment on the steamer, both the espresso and milk are very foamy. Absolutely the worst customer service, called twice and then received an email that they want me to box it up and ship it off to a service center. This is within the first 60 days of purchase - I initially called them right at the 30 day mark. This is not my first DeLonghi product, I've purchased the EC-155 either 2 or 3 times and wore it out. Amazing that something that cost more than twice as much doesn't work even half as well. I was trying to reduce the clutter on my counter by combining both the espresso and coffee machines. Huge mistake. Won't bother sending it off to be looked at, that would be just throwing good money after bad. Horrible customer service. Won't purchase from them again.
阅读更多
113 个人发现此评论有用

E. Louw
3.0 颗星，最多 5 颗星 Looked good but frother only worked once
2019年8月9日 - 已在美国亚马逊上发表
已确认购买
I bought this coffee machine purely on the fabulous customer reviews. What I didn’t realize was that 100% of them are ‘Vine Customer Review of Free Product’. Meaning the customers got a free machine to review. I do believe this put these vine customers in a position more likely to write a favorable review.

The coffee machine looked good and I was quite happy with it. Both expresso and drip functions worked well. It was easy to operate and within minutes we had very good coffee. Sadly the first time I used the frother (after doing the cleaning cycle with it) it stopped working. Going through the manual and trouble finding was no help. It also seemed like it may be leaking water as the tray under the cappuccino maker were full of water spilling onto the counter.