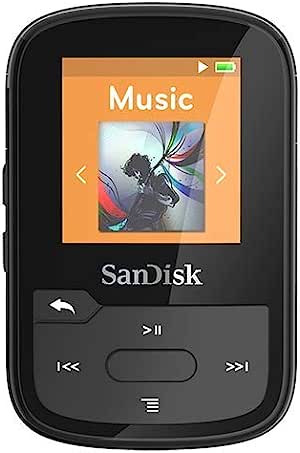 Amazon Customer
1.0 颗星，最多 5 颗星 You don't want to do business with this company
2017年8月24日 - 已在美国亚马逊上发表
颜色: 黑色已确认购买
I purchased this product to listen to recorded books and could not get the player to link via Bluetooth to my headphones. I contacted Sandisk who acknowledge the player had defects which kept it from linking with numerous Bluetooth products. They offered to replace it with the same product that was fully Bluetooth capable, as indicated on their Amazon product description. I returned the product to Sandisk on August 8 and waited. No product was returned to me, and then I got an email, which stated they were out of black mp3 players and would send me a red one. I called them, and after 15 minutes of horsing around with their automated answering system got a live person. Bottom line, accept a red mp3 player or wait indefinitely for a black one. I request a refund and they refused. I request they return my black player so I could return it to Amazon and they refused. You will love this; they said they couldn’t return my original product as it was defective (which didn’t keep them from selling it to me in the first place). So now I sit and wait. My advice to you is not to purchase their products, if you do and are unhappy immediately return it to Amazon because you do not want to go down the path that I have been forced to follow.
阅读更多
172 个人发现此评论有用

Matticus Caesar
4.0 颗星，最多 5 颗星 Great product idea with some execution flaws that could be easily improved upon
2018年6月6日 - 已在美国亚马逊上发表
颜色: 黑色已确认购买
I bought this as an upgrade from an older 4GB Sansa Clip Zip, because I wanted something with bluetooth I could use with my Bose SoundSport Free earbuds while I work out. It's a little larger than the older one, but it holds 16GB which is more than adequate for my purposes. The clip on the back feels sturdy and it's super light, too - despite its slightly larger size, I don't even notice it clipped to the elastic band of my shorts while I'm working out.

If you've ever used an older Sansa model, you'll probably find the OS, menus, and controls are very similar. One big improvement is there is no longer a lock/power button on the top of the device, so I don't find myself accidentally turning it off by grabbing it the wrong way.

I do, however, have a couple of criticisms: I find the OS/controls to be a bit laggy, meaning when I press a button, sometimes it takes a couple of seconds for the unit to react and perform the requested function.

I don't like that the playlists only support .m3u format. This makes it a pain when trying to sync playlists from certain software, and the fact that you have to manually copy the playlist file to the device seems unbecoming - this used to work just fine, so why the tech regression? I suspect this can easily be fixed with a firmware update.

I am also struggling with maintaining a consistent bluetooth audio connection from the SDMX28 to my Bose SoundSport Free (SSF) earbuds. The bluetooth wireless pairs between the devices just fine, but half the time I cannot hear any audio to play. I can see the song running on the player, but there is no sound heard in the SSFs. It works SOMETIMES, but it's not 100% reliable, and that's just annoying. Wired headphones work fine, but for now I cannot tell if this is a transmit-side problem from the Clip Sport or a receive-side problem with the SSFs. I'll experiment some more with some other bluetooth headphones and see if that changes anything.

This could easily become a 5 star product rating, but SanDisk needs to fix some of the issues above for that to happen.

Update 6/7:
I'm upgrading to 4 stars. After some testing with other devices and other bluetooth headsets & speakers, I'm convinced that the bluetooth on this device is just fine and the issue is with my Bose SoundSport Free earbuds. The other issues I mentioned prevent me from giving this a full 5 stars, but as I previously stated, those issues are probably very easily fixable in a firmware update.