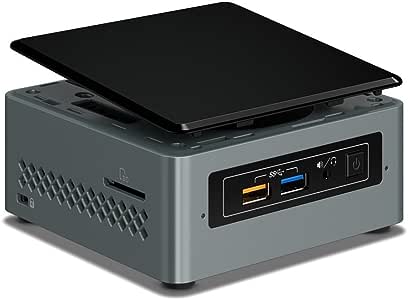 Intel NUC Kit NUC6CAYH is built with a quad-core Intel Celeron processor, delivers cost-efficient Intel-level performance in a fully customizable kit that makes it perfect for basic 4K digital signage, PC replacement, or thin client. This kit gives you the choice to install the OS, memory, and hard drive you want so you can create the exact system that you need. New features include a dual-array front mic and a multi-color LED ring so you can customize your NUC with the look you want. And there's 4K display support via a full-sized HDMI 2.0 port, so you can have 4K digital signs at a cost-eﬀective price point.

linuxtuxguy
5.0 颗星，最多 5 颗星 Wonderful product for media center use
2017年1月19日 - 已在美国亚马逊上发表
样式: Full System已确认购买
I wanted to wait until after I had this product for a couple of days to get a feel for it, and that time has now elapsed.
I will likely re-visit this review in the future, due to some minor expected issues due to it being a new product.

For what this system is, it is incredible. This is a complete system (including windows 10 license), with everything you need to get started.
And, it is upgradeable, which for most use cases I would highly recommend pursuing.

I was quite surprised at how well the system ran with just the included 2GB of ram. When I had the system connected to a 1080P display, I did not have many complaints with the 2GB, however I could tell some things were a bit sluggish than they otherwise should be and memory usage hovered very close to maximum.

Switching over to my 4K tv, though, and I REALLY will need more. (I have placed an order for two 4GB sticks to max this system out while getting the speed advantage of dual-channel. You could also go with a single stick of 8GB for a huge boost, you would just be missing out on the interleaving gains).
Basically, when using 4K output, especially when attempting to play videos, I was seeing dropped frames any time I did anything as intensive as moving my mouse. When everything except the video was still, the system was fine, using very little processing power despite playing 4K video.

And about that 4K video out. This is a bit of a caveat at present, but in another month or two I expect this to have been resolved.
If you use Microsoft's Edge browser, you will have no worries. Hardware accelerated VP9 (youtube) and HEVC (everything else 4K) will work just fine. If you use Chrome, however, you will need to do a workaround to force the browser to use hardware acceleration. I am not going to get into the details of how to do this, but know that there has already been a code commit to unrestrict this, it is just a matter of waiting for it to filter into the released version of the browser.
(This restriction on VP9 decoding in Chrome had been put in place from the Skylake generation of CPUs, which for a time supported a hybrid GPU/CPU decode for this codec. It turns out it was very buggy, and so Intel recently removed support for it from the driver, but not before Chrome took their own step of blacklisting accelerated VP9 decode on all Intel graphic chipsets.)

It is worth noting that even before I took the steps to force-enable the VP9 decoding in chrome, the system was able to mostly handle up to 1080P 60FPS content with very few drops. 4K, however, definitely required the hardware acceleration for smooth playback.

Other than the small amount of included RAM, the other obvious limitation on this system is in the included disk, which is actually effectively seen as an internal MMC card. This means serialized writes and relatively poor performance. I have not benchmarked it specifically, but the flashing activity light was very prolonged in its activity while I had it as my primary storage.
I was fairly quick to install a SATA SSD in the system and clone the internal storage to it. Since then, disk activity has gone way down and responsiveness has increased.

During my install of the SSD, I ran into an issue that surprised me from an Intel system. Specifically, I was unable to get the BIOS to detect an external USB CD drive as a boot device.
Routinely when I use a new system, I will boot to a Linux live cd to clone the disk image for backup purposes.
I tried two different optical drives, both of which I have recently used successfully in other systems, and in both cases this new NUC could not see them, despite selecting appropriate BIOS options to enable legacy booting.
I ended up using a bootable thumb drive to accomplish my disk cloning task, so the USB booting in general clearly DOES work.

I would expect this USB CD boot issue to be resolved with a future BIOS update. (The system as I received it included version 0027, but I upgraded it to the latest 0029. I experienced the CD issue with both releases.)

I will revisit this review after I upgrade to dual channel 8GB ram, as I expect that will greatly improve things.

My only other experience with NUCs is a skylake-generation i3 NUC (NUC6i3SYH). That NUC clearly has a more powerful processor than this one, as evidenced by it software decoding 1080P 60FPS vp9 with lower than 50% processor usage, whereas this one pegs out and drops a few frames attempting to do the same. (As I mentioned earlier in my review, this won't be an issue anymore in the near future as more programs get updated to take advantage of the hardware accelerated decoding, however it does show a limitation regarding other cpu-intensive tasks.)

The included wifi module worked perfectly, seeing both my 5ghz and 2.4ghz networks.

For remote control, I paired it with a Logitech Wireless Touch Keyboard K400 Plus

Again, I went with 5 stars not because this product is perfect, but because the only issues I have currently experienced are perfectly expected for a system at this price point that is brand new to market. Additionally, I expect the issues that it does have will be addressed in the near future. This is also coming from the perspective of intending to use this system as a media center on a 4K television. If I were expecting to use this system for gaming or as a daily driver, I would likely have come to a different conclusion.
阅读更多
83 个人发现此评论有用

J. Morin
4.0 颗星，最多 5 颗星 Impressive Small Form Computer
2017年2月24日 - 已在美国亚马逊上发表
样式: Full System已确认购买
Very impressed with this small device which replaced my old desktop tower. Setup was relatively easy. Added two 4GB SODIMM cards and a 500GB hard drive, and used a HDMI to DVI cable to connect to my existing monitor. Performance is impressive compared to my old desktop. From my perspective the computer is 5 Stars and it did everything advertised and what I want it to.

My overall rating for my Amazon purchase is 4 Stars for hassle below related to adding "frequently bought together" memory listed on the NUC6CAYS Amazon.com page.

Please note: The Crucial 8GB DDR3L (CT102464BF160B) is not listed as passing Intel testing during product development. It will probably show up as 8GB RAM, but may give an "Unsupported 1 Gb or 2Gb Density Error." YMMV. The CT51264BF160B (that's the 4GB version and I bought two) gave me the unsupported density error. I ended working with Intel Support and from the Intel support site, Crucial CT8G3S160BM 8GB or CT51264BF160BJ 4GB (just buy two if you want 8GB) are verified to work properly. I ultimately used a Crucial 8GB Kit (CT2CP51264BF160BJ) and it works fine. The "J" at the end of the part number seems to be the important difference.
阅读更多
53 个人发现此评论有用

Silence Dogood
5.0 颗星，最多 5 颗星 Fantastic product
2018年2月23日 - 已在美国亚马逊上发表
样式: Barebones已确认购买
I have purchased 5 of these and had other people set up another 3. They have been used for:
Headless network monitoring systems running Nagios and Cacti on Centos 7
Centos 7 workstations
Windows 10 workstations
No fan, low power, boots fast, all those ports in a tiny box. What is not to like?!?!

However - IMPORTANT NOTES: First thing when you get the unit - upgrade the BIOS!
Second - if you are running Centos or any linux, go into the bios and set it to boot for Linux
Third - if you want dual monitors under Centos 7 you must to upgrade to kernel version 4
Fourth - if you want the best video performance, make sure you have the latest drivers for the video under Windows