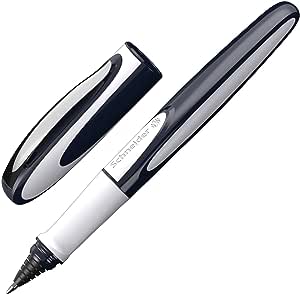 John Peter O'connor
5.0 颗星，最多 5 颗星 Really good, smooth, skip free and uses standard cartridges
2018年10月12日 - 已在美国亚马逊上发表
颜色: weiß/grau已确认购买
Cartridge rollers such as this pen use fountain pen style ink and this pen uses that ink in standard size ink cartridges. That makes it very cheap to use long term. It is quite a wet pen compared to some disposable liquid ink roller-ball pens so I doubt that it would work well for left handed folks but I like the extra smoothness that comes with that. The pen is quite broad and comfortable to hold but it is a lot lighter than most similar sized pens and I like that as well.
You can use this pen with a standard sized international cartridge or with a short one. In the latter case, there is enough room in the body to hold a second spare cartridge so you can easily swap over if you run out halfway through the day. The only problem with that is that the spare cartridge will move about and you can feel that as you use the pen. If that troubles you then I would suggest the use of a small spring or a tiny ball of tissue to damp it out.
Pilot and Stabilo make similar pens that are a slightly better writing experience but which are not quite as nice to hold.
I would rate this pen as being on a par with inexpensive to moderately priced fountain pens.
I use this as a day to day pen and will happily buy another in a few years time when the roller-ball mechanism is worn.

60+ and still having fun
5.0 颗星，最多 5 颗星 If you use fountain pen and want to try rollerballs, try this.
2020年2月17日 - 已在美国亚马逊上发表
颜色: blau/grau已确认购买
Fountain pen inks come in literally hundreds of colors with a significant percentage of them (I'd estimate about 10%) being water-resistant or waterproof. This pen allows you to refill it with standard international-sized cartridges or bottled ink with a converter. More so than any other rollerball pen that uses fountain ink I have tried, this is the best. Better than the $70 pen.
阅读更多
1 个人发现此评论有用

David W Rowland
5.0 颗星，最多 5 颗星 Comfortable bold writing pen
2019年1月2日 - 已在美国亚马逊上发表
颜色: blau/grau已确认购买
This is a smooth writing pen with some scratch feel to it at times. Little to no downward pressure is needed to write so your hands shouldn't get tired. The grip diameter is somewhat large which is good. I'd buy this over any other disposable pen I can think of. Takes international cartridges so many colors are available.
阅读更多
2 个人发现此评论有用

Pamela
5.0 颗星，最多 5 颗星 This pen is the best of both worlds
2018年8月2日 - 已在美国亚马逊上发表
颜色: blau/grau已确认购买
This pen is the best of both worlds. Always wanted a fountain pen but I could not use it correctly. This pen has a rollerball tip but uses fountain pen ink. Loves this pen so much I brought as second one so I can have one with me and one at home. This was a great find and it writes on any type of paper.
阅读更多
2 个人发现此评论有用
加入亚马逊Prime，从此免运费
亚马逊Prime会员可享海外购美/英/日/德跨境免邮，全年无限次！更有免费无限次阅读电子书服务
> 立即加入
了解我们
合作信息
帮助中心和购物指南