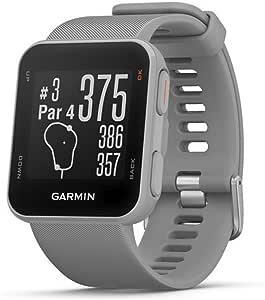 颜色: Grau
技术细节
更多信息
我来补充
Would you like to tell us about a lower price?

JIN
5.0 颗星，最多 5 颗星 Bought this to replace a second Bushnell Neo XS that broke...
2018年10月25日 - 已在美国亚马逊上发表
颜色: Granitblau已确认购买
In the past I have owned two Bushnell Neo XS golf watches, both of which had the plastic crystal covering the display fall out after about 1 year and was lost somewhere on the course... After the second one had this happen I needed to purchase another golf watch and I decided to switch to this Garmin S10 as the quality of the Bushnell was definitely a problem... I'm glad I did... This watch is simple to use, very slim and lightweight and it's rectangular shape is much less intrusive especially since I wear it on my glove hand... It seems to me that it is better built than the Bushnell's I have owned... I do not need a fancy watch, just one that gives the proper distances to both the green and hazards, and, has excellent battery life... I don't use the scoring option and I don't use the app to upload my scores to the Garmin website... This watch gives accurate distances and advances to the next hole flawlessly... One thing I noticed over the Bushnell is when I forget to start the watch until after I finish the first hole... The Bushnell forced me to advance the watch to the proper hole, but this Garmin immediately recognized what hole I was on and needed no adjustment... This leads me to believe that it's GPS system is more accurate than other watches... The only drawback is that the Garmin takes a little more time for it's GPS to come up and recognize the course I am at... However, it is not much more time, and, I just set it to start the round a little earlier than I did with my Bushnell... If you want a golf watch that is accurate, lightweight, very unobtrusive on your wrist , and, you don't need all the fancy bells and whistles, this is the watch for you...
阅读更多
155 个人发现此评论有用

Steve R
2.0 颗星，最多 5 颗星 When the cheap band breaks, you can use a Forerunner 35 replacement band (and not pay Garmin)
2019年4月2日 - 已在美国亚马逊上发表
颜色: Schwarz已确认购买
(Edit: Original review at bottom)

When the cheap, flimsy watch band on this otherwise nice watch breaks, you can get an aftermarket replacement by searching for "Forerunner 35". Apparently Garmin uses the same band on that fitness watch as they do on the Approach S10. Why does it matter? Because you can find "Forerunner 35" replacement bands for less than $10 on Amazon or elsewhere.

Why pay Garmin's absurd price when you can get it elsewhere cheaper (and deny Garmin the extra money they apparently wish to bilk from you?)

I actually love the watch. It's simple to use and tells me all the information I really need. I just use it to tell me how far it is to the green and how far to the penalty areas. It's great for that. But...

My big problem with this watch is the band. I bought my watch in August, and by March the band had broken. It's not like I was particularly hard on it - I just used it as intended. And while the watch has a warranty, the band is not covered. Furthermore, the band (as of the time of this review) is available only from Garmin's web site. It cost $24.99 + tax + $5 shipping (Garmin has free shipping only for orders over $25, so since the band is 1 cent cheaper than the threshold, they charge $5 to ship it). So I guess if I want to keep the watch, I'll have to order 2 bands at a time so they don't screw me on shipping? Nice policy, Garmin.

I guess if you don't mind spending $30+ a couple of times a year to replace the crappy band, then it's all good, right?

Every Garmin watch I've ever bought (and I've owned several) has had this problem. The bands are proprietary, hard to get and ridiculously expensive. Would it be too much to ask to just have it use a regular watch band? I guess so, because then Garmin couldn't get $30 twice a year to replace it. Alternatively, if I have to pay $30+ for a replacement band, could I at least buy one that won't break after just a few months? I guess not.

This is pathetic, and I'm tired of Garmin taking advantage of me.

So this is my last Garmin product. It's a real shame, because the watch itself is nice if not for the poor quality (and extremely overpriced) watch band.

This is how you lose customers.

Edward F. Hart
5.0 颗星，最多 5 颗星 Ah.....An Easy-To-Use Golf Distance Device that is Light and Affordable
2018年12月31日 - 已在美国亚马逊上发表
颜色: Granitblau已确认购买
I just bought this device, and I am so far very pleased. I have been using various golf apps on my iPhone for the last five years. These apps work, but they are not at all convenient. Friends have a range of golf watch brands; all of them were in the $400 range and seemingly bulky. This one has the right features and price for me, so I bought it for myself for Christmas.

I had been concerned that the weight of one of these devices would be bothersome during my golf swing, but after a minute, it feels so light that you forget you are wearing it. Nice. On the one outing so far, the watch knew exactly where I was, loaded the course, and proceeded to operate flawlessly for the whole round. A couple of times, it helped to walk a few additional feet on the tee away from the previous green to have it automatically index to the next hole. Overall, the Approach S10 is just about perfect for the way I play.

The display is excellent in any lighting condition I have encountered. I am not sure how they do that, but it is very impressive.

The battery lasted all day, and assuming it continues to have good battery life, I don't think I will ever need more uptime than it offers.
阅读更多

CW
5.0 颗星，最多 5 颗星 Exactly what I wanted
2018年11月14日 - 已在美国亚马逊上发表
颜色: Granitblau已确认购买
As a high handicapper (17) I have no illusions of grandeur, but like to know what I am trying to do. This watch is as accurate as I can be, so we are good to go. If you are one who can plan and execute a shot to within one yard, maybe you need a laser finder. But if you are grateful to land your shot within five yards of what you are trying to do, this is great!
阅读更多
52 个人发现此评论有用

Robert D.
1.0 颗星，最多 5 颗星 Nice golf watch - Stopped working
2018年9月12日 - 已在美国亚马逊上发表
颜色: Schwarz已确认购买
I liked this watch a lot for about 3 weeks. Then the screen started going blank occasionally. Over the next couple of weeks this progressed to the point where the screen would only come on for a few seconds when you pushed a button. I consulted the Garmin website and did a master reset. Didn't help and I know I did the rest correctly because the date went to December 31. I have sent it back and had to pay postage. I will update post with the outcome of my return. By the way this is the first time I've ever bought anything through Amazon and had to return it.
阅读更多
48 个人发现此评论有用
加入亚马逊Prime，从此免运费
亚马逊Prime会员可享海外购美/英/日/德跨境免邮，全年无限次！更有免费无限次阅读电子书服务
> 立即加入
了解我们
合作信息
帮助中心和购物指南