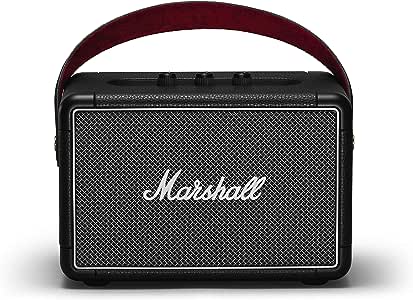 颜色: 黑色
技术细节
更多信息
我来补充
Would you like to tell us about a lower price?

Hit The Road with Kilburn II

Get on the road with Kilburn II. Free from the confines of wires and cords, this bluetooth speaker offers 20 + hours of portable playtime on a single charge. This stout-hearted hero weighs only 3 kg and is the loudest speaker in its class. It produces a clear midrange, deep bass and extended highs that are unrivaled for a speaker this size, and its multi-directional sound will immerse you in your music, indoors or out.

Wfhogan
3.0 颗星，最多 5 颗星 Audiophile quality from a BT speaker? You've gotta be kidding me....
2018年11月21日 - 已在美国亚马逊上发表
颜色: 黑色
UPDATE: Reducing from 5 to 3 stars since the speaker quit working a couple of weeks ago. Will update this review based on Marshall's warranty response, but no way anything I buy gets 5 stars if it breaks within a year, much less 6 months. Another annoyance is that the thing automatically turns itself off after a few minutes of silence. This makes sense, sorta, when it's running on battery power, but it's VERY annoying when I have it plugged in and am using it as a home entertainment center speaker. I could forgive this quirk because the sound is truly magnificent for such a small speaker system, but with it's failure to power-on at all, it's unacceptable. C'mon Marshall - you are better than this!

I was looking for a water resistant upgraded BT speaker to replace an older Braven brand speaker for my boat. While the Braven is impressive for it's size, it's lacking a bit in bass and volume. I auditioned several speakers at my local Best Buy, including 3 offerings by Marshall. The Kilburn 2 stood head and shoulders above the others - Very clear highs, smooth midrange, and punchy lows without sounding colored or boomy.

Back on the boat, it remains impressive down below in the cabin - the sound is best described as "transparent" and uncolored. I'm both a musician and a "recovering audiophile", so I know good sound, and good sound reproduction. I also own a pair of Grado SR 60 headphones, and to my ear, this speaker matches or exceeds the fidelity of these legendary cans. That's really something for an all in one speaker. Frequency response is flat as a pancake, and goes from around 40hz to 20,000kh, so you're right up against the limits of human hearing at both ends. Importantly, this little beast packs 36 watts of audio power into it's tiny footprint.

Many people think high wattage is important for high sound pressure levels, but that's a small part of the advantage of high wattage amps paired with well matched and tuned speakers. What high wattage is really about is headroom and the dynamic range it allows. Turn up a cheap, under-powered set of speakers loud enough to hear soft passages in music, and when the loud parts hit, the speakers break-up, distort, and sound brittle and harsh.

There's none of that here. Turn it up to 11, and it's just as clear as at 2 or 3. That's the mark of a well engineered and balanced audio system. Ironically, Marshall is known for making tube amplifiers for guitars that distort heavily at high volumes lol....

The other part of the sound equation here is the sub-woofer / woofer that eats up 20 watts of that 36. It appears to use a rear firing wave-guide style resonance horn reverse engineered from Bose drek and vastly improved upon. The bass is truly uncanny. It can be easily adjusted along with the mids and the highs, but I've found the best sound is leave both zeroed out.

This is a solid bit of kit. It's heavy and solid in a very reassuring way. This is necessary to prevent resonance, rattling, and "bass walking" due to it's low frequency punch. It's so heavy you're not gonna want to carry it very far - it's more of a tailgate beast than backpacking buddy.

The final delight are the ANALOG KNOBS. Whoever invented push-button volume and tone controls should be sent straight to hell, where they are forced to adjust sound with said buttons for eternity, and endure the overshooting and undershooting and slow response of such a hare-brained idea. Knobs are where it's at - simple and effective, and easy to find in the dark.

Oh, and it's water resistant. I wouldn't use it in the shower or leave it out in the rain, but a spilled beer or a few drops of water isn't gonna instantly fry the thing, unlike the two - count them, two Jawbone Jam-boxes that instantly died from minor encounters with water splashes on my boat. That $400 lesson taught me that any BT speaker used on a boat or outdoors MUST be water resistant, and Marshall delivered.

I was so impressed by the sound of this thing that I bought a pair of Marshal BT headphones. I don't know what the deal is, but the sound like crap, so they are going back. I was unimpressed with Marshall's other BT speakers as well, but this thing is a gem...
阅读更多
194 个人发现此评论有用

Tj
5.0 颗星，最多 5 颗星 Quality plus+++and then Some!
2019年2月5日 - 已在美国亚马逊上发表
颜色: 黑色已确认购买
Very high quality could not find a flaw with the Marshell Killburn ll. Sound is exellent with all types of music from 40s to 2019
Looks good and sounds good. Very well packaged the company wants to make sure there is no loss of quality from packaging .
Bluetooth connect was right now no delay to deal with. This unit was well thought out before it went to market. The battery does last for 20 hoirs been playing mine all day with battery meter dropping only one bar. Exellent job Marshell you got it right including the bass and treble work flawless. I would give this a 10 if I could. Priceless listerning enjoyment! My next door neighbor heard mine playing on my carport walked over he knows nothing about Bluetooth or the streaming process asked me one question which was where do you get that went back home and ordered it from Amazon immediately and ordered one for his son. The Killburn really does is a self seller.
阅读更多

Tony Brock
5.0 颗星，最多 5 颗星 This thing thumps!
2018年10月18日 - 已在美国亚马逊上发表
颜色: 黑色已确认购买
I have to admit I was skeptical when I took this speaker out of the package. Upon removing it, I was impressed with the solid craftsmanship and it looked tough. The real test was the sound. Pairing it to my phone and iPad was easy and I was able to play music immediately. The sound was perfect! Plenty of bass and no distortion. The treble was good, too. And, if it wasn't, the bass and treble are easily adjusted. I love the simplicity of the speaker, too. Worth the price and I definitely recommend it.
阅读更多
37 个人发现此评论有用

Raphael
5.0 颗星，最多 5 颗星 Love it
2018年12月28日 - 已在美国亚马逊上发表
颜色: 黑色已确认购买
I am no audiophile so I will skip the tech stuff about woofers, tweeters, etc.I purchased this speaker to use in my home office connected to free music streaming on my cell phone. I was very, very pleased with the quality of the sound. My daughter-in-law referred to it as a "warm" sound. I was listening to soft music, big band backing up crooners.. Sinatra, Crosby, Krall, JD Lang, Bennett, etc. It sounds a lot more powerful than its size would suggest and this is based on the free version of the music streaming. I like the fact that it has a bass and treble control. Some speakers boast about loudness and water resistance, neither of which was important to me. I have not actually timed the battery life,but I suspect it is as advertised, and I've had no issues.I would highly recommend it to anyone who has the same uses in mind as I have had. If you want to blow the windows out, or throw it in the pool, you might to look at other speakers.
阅读更多
30 个人发现此评论有用

K. C.
3.0 颗星，最多 5 颗星 A step back from last model
2019年1月8日 - 已在美国亚马逊上发表
颜色: 黑色已确认购买
Disappointed in the changes- no longer has AUX input. Wake button- in exchange for what- higher version Bluetooth?! Not necessary. I liked the Gold trim on the older model. The sound is the same- I might add that the older one sounds a bit better separation. Shame!
阅读更多
32 个人发现此评论有用
加入亚马逊Prime，从此免运费
亚马逊Prime会员可享海外购美/英/日/德跨境免邮，全年无限次！更有免费无限次阅读电子书服务
> 立即加入
了解我们
合作信息
帮助中心和购物指南