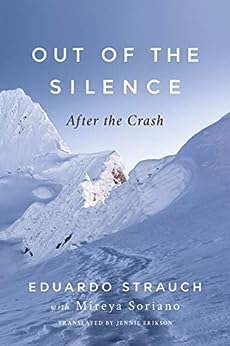 Out of the Silence: After the Crash (English Edition) Kindle电子书

A personal story of survival, hope, and spiritual awakening in the face of unspeakable tragedy.

It’s the unfathomable modern legend that has become a testament to the resilience of the human spirit: the 1972 Andes plane crash and the Uruguayan rugby teammates who suffered seventy-two days among the dead and dying. It was a harrowing test of endurance on a snowbound cordillera that ended in a miraculous rescue. Now comes the unflinching and emotional true story by one of the men who found his way home.

Four decades after the tragedy, a climber discovered survivor Eduardo Strauch’s wallet near the memorialized crash site and returned it to him. It was a gesture that compelled Strauch to finally “break the silence of the mountains.”

In this revelatory and rewarding memoir, Strauch withholds nothing as he reveals the truth behind the life-changing events that challenged him physically and tested him spiritually, but would never destroy him. In revisiting the horror story we thought we knew, Strauch shares the lessons gleaned from far outside the realm of rational learning: how surviving on the mountain, in the face of its fierce, unforgiving power and desolate beauty, forever altered his perception of love, friendship, death, fear, loss, and hope.

Toni Salyers
4.0 颗星，最多 5 颗星 Moving
2023年1月28日 - 已在美国亚马逊上发表
已确认购买
This book was great. It shows what people can do with the help of God when their troubles seem insurmountable. I admire these people for their courage and faith.
阅读更多

S. Dawn
3.0 颗星，最多 5 颗星 Written for Posterity Sake?
2021年9月21日 - 已在美国亚马逊上发表
已确认购买
Generally, I would not recommend a book that I gave a three-star rating to. With this one, though, I feel like if you can look past the book's weaknesses, you will find a story of survival, friendship, family, and faith, which is worth reading. I have not read any of the other books about the crash, so I can't compare it to the others. I will say, though, that I am now definitely interested in reading some of the other accounts of the experience.

For me, this book felt like it was written in the style that you might expect someone to write an account for their children or grandchildren. That's the best way that I can explain it. While it was a good effort and it was an interesting story, it clearly was not written by someone who's a writer by profession. I would say that this is most evident in how some parts of the story are so repetitive. While I was able to get the basic timeline down by the time I finished the story, there were places where I thought, "Wait, did that come before or after that other event?" At other times, I thought that he was talking about two separate events only to realize that he was talking about the same event but just giving us more or different details about it.

The author also takes a few tangents throughout the story. I didn't mind them so much toward the end, when it felt more like he was thinking about how the events that he and the other survivors experienced fit with what their family and friends were experiencing as well as just sort of analyzing the overall experience. In the earlier parts of the book, though, these tangents took away from the plot.

This book was translated from Spanish, and I do wonder if some of the book's weaknesses are more a matter of a translation issue rather than an issue with the original writing.

Overall, the language in the book is fairly clean. There is an f-bomb dropped early in the book just after the plane has crashed, but I think that was the only swear word. Overall, because of the subject matter, the book has the potential to be graphic and gory, but it was handled in such as way that even those with a weak stomach can likely handle the story without too much of an issue. We learn about injuries, but we don't get the graphic details.

POTENTIAL SPOILER ALERT: Cannibalism would probably be the hardest topic for many readers to handle, but it is handled in such as way that I left me asking myself what I would have done in their situation. On the surface, I would say that I would never resort to eating my family and friends, but I've never been placed in that position, so I don't know what I would do. I found it interesting that while we know the survivors are eating those who have died, for a large part of the narrative, the author chooses to simply refer to it as "meat," allowing the reader to almost forget what type of "meat" this is.

At just over 170 pages, this was a quick read. While it wasn't wonderfully written, but it was interesting, and I don't regret reading it.

Martina A. Nicolls
4.0 颗星，最多 5 颗星 Well-told and poignant
2020年7月31日 - 已在美国亚马逊上发表
已确认购买
Out of the Silence is the memoir of a survivor of the 1972 Andes Mountains plane crash with 45 people on board, including the Uruguay rugby team. Thirty-three people survived the initial crash of the flight that left Montevideo bound for Chile. This is the truth of the 72 days on the mountain after the crash, and what the survivors have to do to continue living—at 3,500 metres (11,700 feet) in freezing, treacherous conditions.

A mountain climber finds Eduardo Strauch Urioste’s wallet near the crash site in 2005 and returns it to him. This is the impetus for Strauch, who was twenty-five at time of the crash, to break his silence and write about the tragedy, and the rescue, and how it changed his life forever.

Thinking they would be rescued the next day, the crash tests the limit of each person’s moral identity, integrity, resilience, determination, and spirituality: ‘most of us had never faced a decision more difficult than what subject to study at school, whether to start or end a relationship, whether to accept or reject a job offer.’ After the crash, their decisions meant life or death. There were individual decisions to be made, and decisions that must be made by the remaining group.

Despite several books and movies about the tragedy, Strauch writes his own personal account of the ‘quiet but continual battle between fear and hope.’ Half of the book is about the mountain and how he survived, and the other half is about his life after the rescue of the final 16 that survived.

Decades after the crash, love, family, and friendship are the main themes. And time and transcendence. And the elements and nature. This well-told, easy-to-read memoir is both interesting and revealing in its honesty and poignancy.
阅读更多
6 个人发现此评论有用