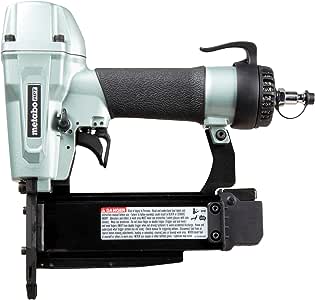 The NP50A 23-Gauge PRO Pin Nailer has been designed with the professional carpenter in mind. It can drive 23-gauge pin nails ranging from 1/2" to 2" in length. Please note, it is necessary to buy high quality pins to ensure the tool works as expected. Pins with lower grade metal can be less rigid and bend at the point of entry or bend at the point of impact from the tool. Each of these scenarios can cause the tool to jam or the pin not to penetrate the wood as anticipated, especially at longer lengths. Metabo HPT pin nails are manufactured to higher tolerances and perform better in our nailers. For best performance, use the following genuine Metabo HPT pins, available on . 1) 22999SHPT (1/2") 2) 23000SHPT (5/8") 3) 23001SHPT (3/4") 4) 23002SHPT (1") 5) 23003SHPT (1 3/16") 6) 23004SHPT (1 3/8") 7) 22995SHPT (1 9/16") 8) 23006SHPT (1 3/4") 9) 23007SHPT (2") The high-grade aluminum magazine not only provides exceptional durability but also prevents jams caused by fastener overlap. The 360 degree adjustable rear exhaust has a build-in silencer to reduce noise pollution and direct air exhaust away from the user or job site debris. The automatic dry-fire lockout protects your work piece by not allowing the tool to operate if there are six of less pins in the magazine. The 360 degree adjustable belt hook helps keep the tool by your side at all times. The NP50A pin nailer-- for when only the best will do

BEEts
5.0 颗星，最多 5 颗星 Best pinner yet.
2020年8月31日 - 已在美国亚马逊上发表
样式: Pin Nailer Only已确认购买
I've only used four other brands, but I like this one the best. I've never had issues with Hitachi, so I expect this gun will prove the same worth. I knocked off a star for "maneuverability" due to it's slightly awkward trigger (which I'll get used to), and a star off of "value" since I can't justify what I just spent on it unless it outlives my last pin nailer. Only time will tell.
阅读更多

M. Ibanescu
5.0 颗星，最多 5 颗星 Consistent performance, as expected
2019年10月18日 - 已在美国亚马逊上发表
样式: Pin Nailer Only
I am tackling all sorts of woodworking projects for fun. Pneumatic guns were missing from my growing list of tools, so I have been trying to decide on the tools for quite some time now.

The NP50A is a relatively new addition to the line of tools that Hitachi (now Metabo-HPT) has for pin nailers, and without a lot of reviews. Its smaller brother, the NP35A, is very highly rated. The 18-gauge brad nailer (NT50A) seems to be the best in its class. This kind of track record helped me narrow down my searches to Metabo-HPT. I also own a Hitachi table saw and a 10" Hitachi miter saw, and I am extremely happy with both.

The decision between the NP35A and NP50A was more difficult, since the price difference is not insignificant. Since I wanted to have the choice of using 2" pins on occasion, paying the extra money seemed like a good long-term investment.

I've tested the nailer as soon as I received it, and it didn't disappoint at all. Having limited experience with pin nailers - I had used a friend's to put shoe molding in our kitchen - I am still learning, and I wouldn't be able to explain how it differs from other brands.

23 gauge pins are deceptively thin, their holding power is significantly larger than what one thinks. That, combined with the nearly invisible fastener head, makes them a good choice for detailed work.

One small project I used the nailer immediately on, and benefited from the longer pins, was a set of frames I had built previously, and for which I was questioning their strength, given that they were only glued on. Getting pins in the mitered cuts made them feel much sturdier. The pins were constantly driven flush to the surface, and there was no further action needed.

From an ergonomic perspective, the pin nailer is heavier than the 18 gauge brad nailer. This was a bit surprising, one would think the smaller fasteners would mean a smaller tool. But for my personal use, the extra pound is not a problem, since it is unlikely I'd use the pin nailer on a ladder, or for long periods of time.