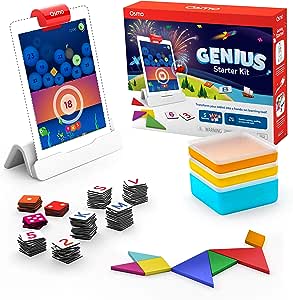 样式: Genius Starter Kit
技术细节
更多信息
我来补充
Would you like to tell us about a lower price?

Arjun
5.0 颗星，最多 5 颗星 Perfect learning gift for your kids
2019年8月18日 - 已在美国亚马逊上发表
样式: Genius Starter Kit已确认购买
We bought Genius kit after hearing about it since long from kid's school and our friends who has the product. After playing with the product along with my daughter, I would highly recommend it and think it is every penny worth at the price $99.99. Though there are a lot of learning games in the market which allows kids to learn basic mathematics and practice it; I think this one is unique because it never makes them glued to the screen. As far a kid is concerned, it's like they are playing with chips of a board game or using a pen to draw and competing to finish the challenges thrown by the screen. That is so cool!
Of all the games, I loved the Numbers game. I can't think about a better way to teach kids addition and subtraction and that too at a mental math level. Osmo team has figured out a way to make the kids relate addition to "bring units together" and subtraction to "separate out units". That's precisely what it is and since the idea is hit at such a basic level, kids are easily able to grasp the concepts. I would highly recommend all parents to play these games along with the kids and gently let them understand that the things they are doing in Numbers game is nothing but the "boring" addition and subtraction they learn at their school. I have seen this really motivating my daughter who has now started using the mental calculation idea back at school while doing the same. In my opinion, this the best way to derive unbelievable value out of this product. You just need to do it a couple of times, your child will take it up from there. Similarly, found the Words game a good way to improve spellings and vocabulary. Osmo has lot more libraries on their My Osmo portal. Make sure you sign up while doing registration and download these libraries.

buzz
5.0 颗星，最多 5 颗星 Great for stem learning from age 4-8
2019年10月7日 - 已在美国亚马逊上发表
样式: Genius Starter Kit已确认购买
This set is actually upgraded quite a bit from their original set. It includes these great plastic containers perfect for storage.

My daughter really likes the tangrams - they have levels that get more difficult as it goes along.

The number game is pretty fun too but perhaps a little too easy for my 9 year old. But when we had the original set at age 5, I had her play with it for 10min everyday and I found she gained more confidence with addition and substraxtion. Plus she never complained playing with it (compared to practicing math in a traditional workbook)

I’d high recommend getting this kit starting age 4 or 5. But probably becomes too easy after age 8. If your child is younger, I’d recommend the junior kit!!
阅读更多
41 个人发现此评论有用

Kari
5.0 颗星，最多 5 颗星 A great go-to gift idea for friends and family.
2019年9月4日 - 已在美国亚马逊上发表
样式: Genius Starter Kit已确认购买
I bought OSMO for my nieces who were visiting for a month of summer and we've all been blown away! There are so many fun games for them to play and I don't feel guilty about giving them screen time. It's engaging, educational, super fun and often I ended up playing with them. I love seeing them get hands on learning and working together! We are buying another Genius Starter kit so they have it at their home as well.
阅读更多
19 个人发现此评论有用

Roma Patel
5.0 颗星，最多 5 颗星 Great gift and purchase! Def worth it!
2019年9月3日 - 已在美国亚马逊上发表
样式: Genius Starter Kit已确认购买
Numbers is a great game. My 5 year old son loves it. The words game is just beginning to be his favorite and even I enjoy doing the shapes game with him. All in all a great buy. Very educational. And a great gift.
阅读更多
17 个人发现此评论有用

TC
3.0 颗星，最多 5 颗星 Ok, but boring, and it should include the work pad
2020年4月19日 - 已在美国亚马逊上发表
样式: Genius Starter Kit已确认购买
I really liked the idea of these activities and the tactile, inter-activeness that Osmo does. However, the games are kind of limited, boring and slow (at least for a kinder). Hopefully in the future they update the programs so that our younger child can really enjoy it because I think there is a lot of potential here. I also wish these games had more directions for children to follow so that they could do it more easily and independently at this age, but it does keep me involved in what they are doing which isn't a bad thing.

My child does like the numbers activity, but that is it. He will do the Words one some, but again it is rather boring (so is the numbers one, but just not quite) even though it is an important activity to do. Due to the nature of these activities, I remove one star. I probably would have given 4 stars (I did for the younger aged set) if I hadn't realized a downfall of this set by buying that one.

Since we also bought the younger child one, I learned that this one does have another deficiency. It needs the Osmo work pad. The Osmo work pad is nice quality, and if you are working on a child oriented table with a design on it, Osmo picks up the table design which can be problematic during activities, so that is why I docked another star. We use a piece of paper as a work mat, and while it works, is kind of lame.

There is a parent app that is not all that great, and their app to download and use the activities is so-so and semi-confusing. I did not pay full price - I would not recommend paying full price - but for a deal like I got, it is an okay purchase and we use it frequently so I am glad we purchased it (especially with isolation going on). It is fine, but really could have been excellent, and I hope in the future they make it so. I will keep an eye out for other activities in the future.
阅读更多
8 个人发现此评论有用
加入亚马逊Prime，从此免运费
亚马逊Prime会员可享海外购美/英/日/德跨境免邮，全年无限次！更有免费无限次阅读电子书服务
> 立即加入
了解我们
合作信息
帮助中心和购物指南