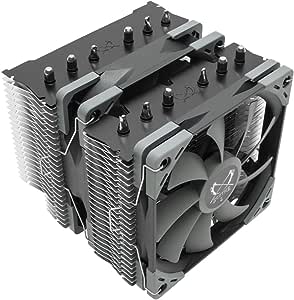 gv115
5.0 颗星，最多 5 颗星 get this over noctua
2019年8月23日 - 已在美国亚马逊上发表
已确认购买
I've owned a Noctua D15 (dual fan version) for awhile now and when I finally saw that Scythe released a version 2 of the fuma I was curious and decided to get it and test it out. It's been years since I last used a Scythe cooler. Before installing the Fuma 2 I ran a thermal benchmark using an absolute worst case unrealistic, brutal load and for that, Prime95 AVX with "Small FFTs" option was the obvious choice. My processor is a Intel I9 9900K with a P1 TDP manually set to 140 watts and a P2 of 175 Watts manually set in the bios. For monitoring I used HWINFO64 and let the test run for 20 minutes. After 20 minutes these where the results:

After installing the Fuma 2 I ran the same benchmark again with the Fuma 2 stock configuration which is having the 15MM slim fan in the front as intake with the 25MM in the center for pull. Here are the results after 20 minutes:

So the difference between a stock config D15 dual fan version and a stock config Fuma 2 is about 3 - 4C. Which falls in line with the difference between a D15 dual fan version and a D15S with its single fan. That's actually incredibly impressive for the Fuma 2 matching a D15S considering it has a lower surface area heatsink compared to the D15/D15S.

And its even more impressive that it was only 3 - 4C difference compared to the D15 dual fan version considering the D15 has more surface area along with bigger, stronger fans compared to the Fuma 2. The Fuma 2 fans only offer 0.9 (15mm) and 1.05 (25mm) mmH2O static pressure vs the 1.5 mmH2O of the Noctua NF-A15 PWM fans. That means the Fuma 2 heatsink is incredibly efficient at removing heat.

So after initial testing I decided to see how much better the heatsink would be if I swapped the front 15MM fan with a full size 25MM fan. Since I have an extra Noctua NF-A12x25 from my previous project I had as shown in an older pic attached to this review to show my previous D15, I opted to use it. The A12 has a static pressure rating of 2.34 mmH2O so its a nice increase over the 15MM 0.9 mmH2O. I was really curious to see how well it performs with just one on the Fuma 2 because in the past I tried two of the A12's on my D15 and it barely a made difference. Only a 1-2C drop. After another 20 minute test these were the results:

So with a simple swap of the front 15MM fan with the A12 I saw a nice 3 - 4C drop across the board. Just slightly 1C lower than the D15. So close its within margin of error. This really shows the Fuma 2 actually benefits from having stronger static pressure fans vs the D15. The heat fin system Scythe has going on really does work and isn't a gimmick. So I had another idea to see how well I can push it and decided to take advantage of the extra fan clips Scythe includes by mounting the 15MM fan on the back of the heatsink for a triple fan setup. These were my results:

Pretty impressive but for my daily driving I decided to just keep the dual fan config with the A12 in the front and the Kaze Flex 25mm in the center. It's a much cleaner look.

In terms of build quality the Fuma 2 is identical to Noctua. High quality materials, nickleplated copper, 6 heatpipes, amazing heat fin innovation that really does help increase static pressure, and a mounting system nearly identical to Noctua's. I actually prefer Scythes clone of Noctua's mounting system because its mounting hardware feels more durable than Noctua's. Its pressure bar is a lot thicker and heavier and the mounting bar system is thicker and heavier as well. I also like how Scythe added rubber padding underneath the mounting spacers. Noctua doesn't do this so you just have bare, hard plastic pushing against the PCB while the Scythe has the nice rubber to prevent any chance of causing scrapes or scratches against the motherboards PCB. Scythe also includes a much nicer screw driver as well. Its nearly identical to the nice one BeQuiet ships with its coolers. An actual, fully function screw driver.

In terms of "defects" I didn't notice any with my Fuma 2. Nothing was bent. Nothing has dents, chips, "black stuff" or anything like that. I know one user here left a review complaining of having a bent heat fin and "black" stuff left over from the Nickle plating process, but mine didn't come like that. Funny thing is, he praised Noctua for "not having that" while my very own D15 actually has that same black stuff on the side of its base plate that was left over from the Nickle plating process, came with bent fins that I could never bent back perfectly, and "chips" on its base plate. Which is nothing major and that's the purpose of thermal paste. To fill in those imperfections. I never dinged that against Noctua because that stuff is normal. None of it affects thermal performance. My $80 Morpheus GPU cooler I have sitting next to me on my desk in its box has the same problems as my D15. Even my ancient Noctua D14 came with bent heat fins and even its heatpipes where bent enough to push the forward heatsink inwards a bit.

Overall I'm extremely impressed and happy with the Fuma 2. It has officially replaced my old D15 for me. It's more compact by being smaller, weighs less, doesn't block the first PCI-Express slot, has excellent ram clearance, identical build quality to Noctua, and looks great. Scythe did a fantastic job with it. For $60 you cannot beat this cooler. Stock configuration it competes with a D15S in performance but for $25-$30 less and comes within the ballpark of a D15 dual fan version for $25-$30 less as well. If you have any spare 120x25MM fans laying around and don't populate all 4 ram slots you can replace the 15MM fan with that spare and get practically identical D15 dual fan version performance but for far less. As of right now, I cannot recommend the D15 anymore. The Fuma 2 is the way the go.

Chris
5.0 颗星，最多 5 颗星 Scythe has a winner here.
2019年6月22日 - 已在美国亚马逊上发表
已确认购买早期评论人奖励(这是什么？)
Great cooler, from my testing appears on par with Noctua NH-U14S or NH-D15S. It is also about as easy to install, the mounting system is good and it comes with a nice screwdriver that is useful for other things. Does not interfere with RAM slots at all. I think Scythe will be my go-to CPU cooler from now on for performance and value, knocks everything else out of the park. I believe this cooler could be even better with higher RPM fans, but it would likely hurt its silent aspects. The only negative I have is that the fins are rather sharp compared to others but they won’t cut you unless you are completely careless.
阅读更多

Given that my case is against my desk, I can't see the lights on the cooler so I figured I would try something a bit better as far as noise and cooling. I decided on this Fuma 2 based on recommendations online and boy was I disappointed at first.

I turned on my computer after installing it and immediately ran CPUZ stress test against 24 threads. I was using hwmonitor to track my temps and they immediately jumped to 95c. With the Wraith I was getting 84c after settling for a few minutes. I was puzzled to say the least. I ran it a few times and got the same result.

I was about to just pack everything up and do a return and removed the heatsink...then I noticed I forgot to take the sticker off the mounting surface...doh!

This made my hopeful again and reapplied the provided paste and reran the stress test. With this cooler the stress test settled at 74C. That's a good 10C drop and it's quiet at 100% load across all cores.

I'm very happy with this cooler as I don't like the idea of liquid being near my computer with AIO cooling. Installation is simple for AM4, which I'm glad about since I had to remove the cooler because of my dumb mistake.

I'm now a Scythe fan. The value and performance of this cooler is great. The one thing I noticed is that my idle temps were lower and consistent with my Wraith RGB at 45C, but this one fluctuates between 44C and 51C. I'm not entirely sure what causes that though. It could be due to the fact that I'm using the splitter on the two fans so the PWM control is acting weird.