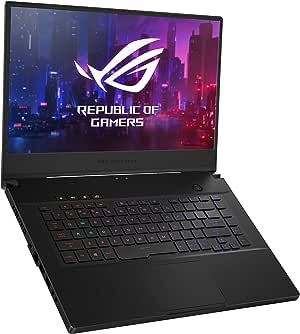 Omer Hakan Yaran
5.0 颗星，最多 5 颗星 Cons and Pros
2019年12月6日 - 已在美国亚马逊上发表
样式: Core i7-9750H | RTX 2070 | 1T SSD已确认购买
Finally received this laptop after one wrong item. The first impression was the built quality and aesthetic looks of the PC. I had a big disappointment when I heard the speakers and weird sounds they make but after 5-10 mins they turn to normal and now they are fair for me.

J. Lewis
5.0 颗星，最多 5 颗星 Not Cheap but Def Worth the Money
2019年10月4日 - 已在美国亚马逊上发表
样式: Core i7-9750H | RTX 2070 | 1T SSD免费商品的 Vine 买家评论( 这是什么？ )
The ROG Zephyrus M Thin and Portable Gaming Laptop by ASUS is my first 100% gaming laptop and while I'll admit to being blown away by this machine, this doesn't mean I won't note a few issues about it. First, regarding its speed – it's incredibly fast booting up and in shutting down even when Windows 10 wants to install updates during reboots. I have never had a machine handles updates more quickly. While downloading some Steam Valve games over WI-Fi, for instance, I noted speeds that were close to what I've gotten over a hard-wired Ethernet connection. The speed of games I play reached 65 mbps, nearly twice the 35 mbps I got with them on every other computer I've tried. I had it connected at 5Ghz to obtain these speeds, I didn`t bother with 2.4Ghz because I have too many other streaming devices latched onto that signal of my router already.
When it comes to installing software and/or loading programs and multi-tasking the Zeph M is very smooth and responsive, switching between applications seamlessly. The i7-9750h makes this possible with its Hexacore processing and speeds from 2.6-4.5Ghz. This capability is doubtlessly due to the 16 gigs of ddr4 ram and the Ge-force RTX 2070 graphics with Max-Q design. The card had 8 gigs of its own ram (DDR6), enabling me to set my games' resolution with a 240Hz 3ms refresh rate: sharp, detailed and the smoothest that I've ever seen my Resident Evil 5 run. This computer also has the strongest onboard graphics Intel 630 to switch to if you want to consume less power but still play games without much loss in quality.

There is a 1TB SSD inside that syncs nicely with the above mentioned speed and seamlessness, with rapid boot times and shut downs. The audio is incredible with a surreal 3-D feel about it, though this effect is evident only in a very quiet room. A minor short-coming with this audio, however, is that the maximum volume on stock apps (and on Windows 10 master volume controls) is not very loud against constant background noise. If that requirement is met, it`s like a mini theater in your lap.

There are a few cons that need mention: It comes with an average amount of bloat, and some of its more personalized software was a disappointment due to the fact that many were free trials, something that I didn't catch until after I'd installed them. This makes such programs seem more like additional bloatware to me. Also, this laptop does not come with a camera; the pre-installed Skype program is aggressive enough to remind you that you either need install a camera or uninstall Skype. There is no SD card slot. Many devices really on them these days and they are very fairly standard even in relatively inexpensive machines. Nor is there a CD/DVD reader/writer either, though this is less surprising given that such devices can been seen as dated tech by now. I suspect that this particular omission may also have been taken to keep this laptop as thin and sleek as it is. By way of compensation, there are three standard USB and one USB-C ports. Ethernet, headphone, HDMI, and a mic ports make up the rest of the inputs.
The system does consume large amounts of energy so the battery comes off a little disappointing. Even while it was plugged in it would only max out at 96 percent charge, at which I was worried it was defective but after shutting it down and charging it would reach 100%. It can also become very hot and the internal fan is rather noisy. A few tweaks will alleviate some of these issues and the software that comes with it can help you customize different profiles for this.
Now the best part for me that grabbed my attention was the design. It's thin 15.6 inch perfection in a titanium brushed lid and a very nice illuminated red logo. The keys are large, flat and smooth, very quiet to the touch. The keyboard comes with an Aura feature, which illuminates the keys in a rainbow of color, pattern, pulses, etc. All the keys are well lit and easy to understand when it comes to media keys and icons for specialized keys. You can customize your very own light show on your keyboard. There is no number keypad, but who cares ? It's pretty enough to forgive that. These features sacrifice battery power so I'd suggest employing them only while the machine is connected to its power supply. I must say that this is a very impressive system and if you can afford it, I'd say go for it ... you will not be disappointed by its performance.
阅读更多
197 个人发现此评论有用

Uncle Sam
1.0 颗星，最多 5 颗星 Asus needs better quality control
2020年1月8日 - 已在美国亚马逊上发表
样式: Core i7-9750H | RTX 2070 | 1T SSD已确认购买
Ordered this and one of the fan bearings was bad. It was loud at idle and actually kinda shook the laptop a little bit. Talked to asus customer support to confirm and once they did i returned it. Got a second one of these and the fans were fine this time, but the second one had overheating and frame rate issues. I think they forgot to thermal paste the cpu. It was overheating and even old games like Diablo 3 weren't even coming close to max frame rate. Pretty sure the laptop was tanking frames to lower heat levels, but at times it would crash anyways. Had to return the second one too. Grateful amazon has a good return policy. Not buying asus products in the future.
阅读更多
84 个人发现此评论有用
加入亚马逊Prime，从此免运费
亚马逊Prime会员可享海外购美/英/日/德跨境免邮，全年无限次！更有免费无限次阅读电子书服务
> 立即加入
了解我们
合作信息
帮助中心和购物指南