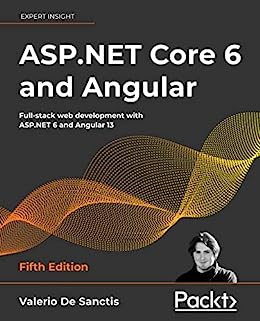 Every full-stack ninja needs the tools to operate on front-end and back-end application development. This web app development book takes a hands-on, project-based approach to provide you with all the tools and techniques that web developers need to create, debug, and deploy efficient web applications using ASP.NET Core and Angular.

The fifth edition has been updated to cover advanced topics such as Minimal APIs, Web APIs with GraphQL, real-time updates with SignalR, and new features in .NET 6 and Angular 13.

You begin by building a data model with Entity Framework Core, alongside utilizing the Entity Core Fluent API and EntityTypeConfiguration class. You'll learn how to fetch and display data and handle user input with Angular reactive forms and front-end and back-end validators for maximum effect.

Later, you will perform advanced debugging and explore the unit testing features provided by xUnit.net (.NET 6) and Jasmine, as well as Karma for Angular. After adding authentication and authorization to your apps, you will explore progressive web applications, learning about their technical requirements, testing processes, and how to convert a standard web application to a PWA.

By the end of this web development book, you will understand how to tie together the front-end and back-end to build and deploy secure and robust web applications.

What you will learn

Who this book is for

This book is for experienced ASP.NET developers who already possess some familiarity with ASP.NET Core and Angular and are looking to learn how to use them effectively together.

The fully documented code samples (also available on GitHub) and the step-by-step implementation tutorials make this book easy to follow.

Xeryus
1.0 颗星，最多 5 颗星 Poor quality control from Packt Publishing
2022年6月3日 - 已在美国亚马逊上发表
已确认购买
The copy I received, the pages are upside down and in reverse order. Also the margins are too wide pushing the text to the edge of the pages
阅读更多

1.0 颗星，最多 5 颗星 Poor quality control from Packt Publishing
2022年6月2日 在美国审核
The copy I received, the pages are upside down and in reverse order. Also the margins are too wide pushing the text to the edge of the pages
该评价的图片

Tony V. Le
5.0 颗星，最多 5 颗星 Good Reference Book
2022年6月22日 - 已在美国亚马逊上发表
Before going into this review, I just wanted to clarify that I've had the opportunity to review the book beforehand digitally.

First, this book mentions that it is for intermediate and experienced developers, and I believe this holds throughout. If you are new to ASP.NET Core and Angular, I'd recommend getting this as a reference book. It can be very overwhelming at first if you don't understand everything and are casually browsing through it.

From an experienced developer's standpoint, I like purchasing books to reference throughout my career and work. This is one of those books you can leave close by and pull out when you need to make a quick reference or take a quick refresher. It's detailed with plenty of example code and references to other material.

Daniel fisher
5.0 颗星，最多 5 颗星 Oh WOW!!!!
2022年4月14日 - 已在美国亚马逊上发表
This book is well written and it says it's for an intermediate programmer but I feel that if you understand the basics of angular you could pick up on this book fairly quickly.

The book goes into a history of each version of angular and that is kinda interesting but the thing that drew me to it was the .net 6 information. Also the section on debugging and unit testing is priceless. There needs to be more unit testing in the professional world.

I would recommend this book to someone wanting to increate their knowledge of angular and .net6 ac
阅读更多
1 个人发现此评论有用

Kevin Griffin
5.0 颗星，最多 5 颗星 Great book with new updates!
2022年4月12日 - 已在美国亚马逊上发表
I had the opportunity to read and review the 4th edition of this book based on older versions of ASP.NET Core and Angular. I was very happy to see a new edition with updates!

If you're an aspiring ASP.NET Core and Angular developer, this is just the book for you! It'll take you step-by-step through everything you need to know to build production systems with .NET with Angular.
阅读更多
1 个人发现此评论有用

The book is nicely explained and starts with the very basics of Angular and .NET and teaches you the environment setup for development. The book nicely covers Entity Framework and explains to build an API to fetch/save data. The best part is, that it covers Authentication and Authorization which help to create a full-fledged production-ready application. For experts, topics like PWA, GraphQL, SingnalR, and deployment strategy on Windows/Linux/Azure are nice to explore and implement.

On a final note, it's a great book for everyone as it covers many aspects of Angular with the ASP.NET Core development technologies stack.
阅读更多
2 个人发现此评论有用